A new study reveals whether it’s better to be drunk or high before having sex. 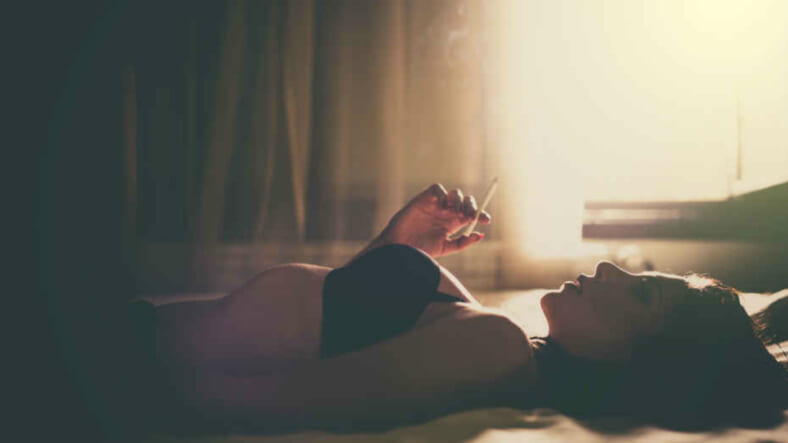 There’s no denying that drunk sex is a lot of fun. You know, downing a bunch of drinks, letting loose, and just having some sloppy, messy, gloriously drunken sex.

Then there’s stoned sex, which is an entirely different category of phenomenal sensations. Your head is in another dimension than your dick, and every thrust your junk feels like it travels to heaven and back.

But which sensation reigns supreme? Drunk sex or stoned sex? Both are just so good, it’s hard to say which one takes the cake.

To help us answer this immortal question, Joseph Palamar and his colleagues at New York University recruited 24 participants to take part in a series of in-depth interviews so that we can finally know if it feels better to drink up or toke up before having sex.

1. Beer googles during drunk sex are definitely a thing. It’s happened to all of us. You’re six beers in, you spot a hottie at the bar, one thing leads to another, and you take her home for a night of sinful debauchery. But when you wake up in the morning totally hungover, holy shit. That hottie is now a nottie. Yup, once you sober up and those beer goggles dissipate, the harsh glare of sobriety takes over…and sometimes it can be pretty damn rough.

The participants in the study “overwhelmingly reported that alcohol use was more likely to (negatively) affect the partners they chose,” and both men and women said alcohol lowers their standards so they sleep with anything with a heartbeat.

However, there’s no such thing as weed goggles, and you have a lesser chance of waking up next to Quasimodo after getting baked. “With weed I know who I’m waking up with. With drinking, you don’t know. Once you start drinking, everybody looks good,” one participant said.

The study also found that unlike alcohol, marijuana use was more associated with sex with people participants already knew, like girlfriends and boyfriends, and not randos. So that’s a pretty big difference.

2. You may regret drunk sex more than stoned sex.The study found that the most common feeling after drunk sex was regret. “Both males and females commonly reported that regret, shame, and embarrassment were associated with alcohol use, but this was rarely reported for marijuana.”

“I want to cook the person something to eat (after sex) when I’m high,” one participant responded. “When I’m drunk, it’s like, ‘I’m out of here.’ Or get away from me.” Wow, what polar opposite post-coital mood states.

3. There are less negative physical sensations during stoned sex.When you have sex while really drunk, you can get the spins, nausea, you might throw up on the lucky lady, and it’s even possible you might blackout mid-fuck. One participant expressed that he needed to take a short break from boinking because he “had to stop and go hurl.” That’s hot.

But that basically never happens during stoned sex. If there are any interruptions when you’re doing it baked, it’s all mental, and usually manifests in the form of losing motivation. “You’re so high (on marijuana) . . . you start thinking sex is weird. ‘What is sex?'” one participant philosophically said.

4. Stoned sex usually just feels better than drunk sex.According to the study, alcohol numbs sensations, whereas marijuana enhances them, so yes, toking up before getting busy makes for one hell of a lay. With alcohol, “Everything is sort of blunted and muted, whereas with marijuana it’s intensified.”

And thanks to that booze-fueled numbness in your nether regions, you last a lot longer in bed when you’re drunk. Or you just get whiskey dick. Depends on how much you drink, really.

It “sometimes lasts too long,” a respondent said. “Compared to when you’re high – it feels so great and it might be a little shorter.”

Also, getting high leads to “more tender, slow, and compassionate sexual acts, and to involve more sensation and sensuality than alcohol,” and both men and women reported longer and more explosive orgasms while high, and one participant even said that her orgasms were “magnified at least by five times.” Hey now!

5. Drunk sex can be riskier than stoned sex.“With regard to sexual risk behavior, the majority of participants felt that alcohol was riskier, sexually, than marijuana,” the researchers wrote in the report. Participants said they threw their good judgement out the window when they were drunk, and we know we do the same. They reported being likely to blackout and forget who’s pants they were getting into, what they were doing, and whether or not they wrapped it up. Yikes.

However, with pot, participants said that they felt in control, and didn’t have risky sex like they would with marijuana. “One participant interestingly pointed out that marijuana use decreased his likelihood of engaging in risk behavior because while high he was too paranoid to give in,” it says in the report.

So there you have it, folks. It looks like stoned sex may just trumped drunk sex, but this is just judging from one small group of bravely honest folks. It all depends on personal preference. If you’re like me and you like getting tanked before getting it on, so be it. Or if you’re one who enjoys taking a looong hit before hittin’ it, more power to you.