An Australian Dude Checked a Single Can Of Beer On His Flight, Because Why Not?

“I half expected to find it empty.” 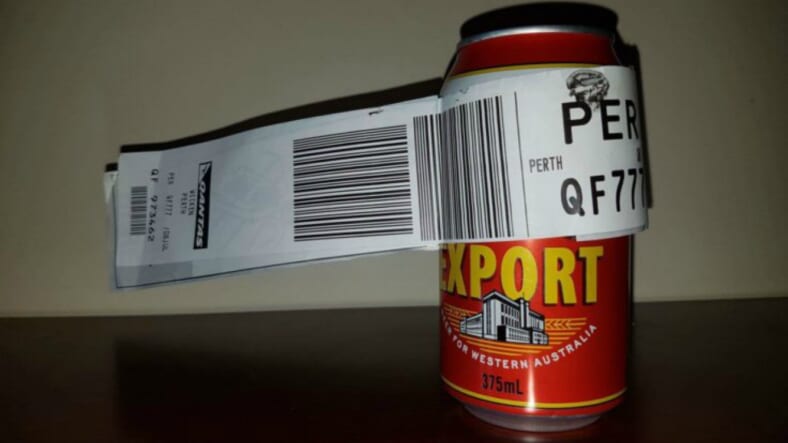 What’s the craziest thing you’ve ever checked on a flight? A lawn chair? A kayak? Or perhaps four bottles of rum that you bought from duty free, only to have a fussy TSA agent threaten to take your booze on the connecting flight unless you checked it as luggage? Yeah, that happened to me, and I’m still salty about it. They all made it in one piece, so hallelujah for that.

Anyway, if you think checking four bottles of rum is something, just wait till you hear this: an Aussie named Dean voluntarily checked a single can of beer (literally one singular can of beer) on his flight, because why wouldn’t he?

In an interview with Unilad, Dean explained the method in his madness:

“One of my mates works at the airport and he and I were wondering what I could check as luggage and get away with – a single deodorant can was another idea – but the export can was way more iconic so I went with that.

“Honestly the thought of a single can of export making its way down the baggage carousel was too good to pass up so I thought I’d give it a whirl.”

“I was right up the back end of the plane, so I rocked up to the baggage carousel late. There was no luggage out yet but everyone was milling around and had their phones out so I was pretty sure I knew what was going on.”

“Sure enough there she was, alone on the carousel proudly making her way around. And there I was in my flanno and RMs to greet her. It was perfection. I half expected to find it empty, but if it didn’t turn up I’d have filed a lost luggage report.”

And finally, when asked if he cracked that bad boy open right then and there, Dean concluded: “That was a strong consideration but I’m saving it to crack when it’s cold and I’m with the boys.”