You’ve got to see this picture to believe it. 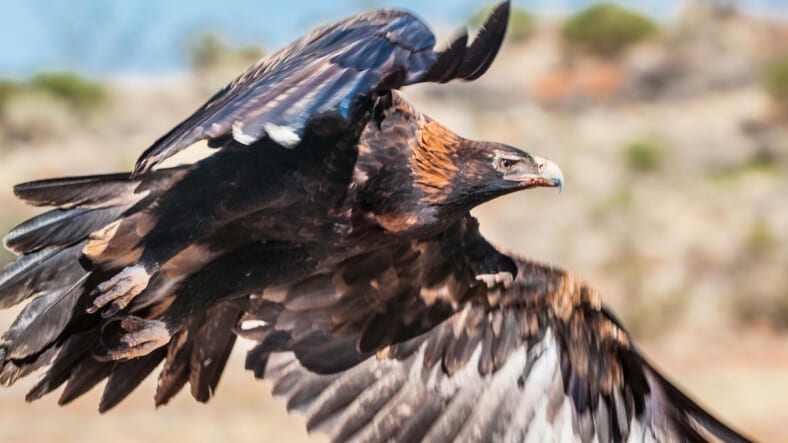 Australians are an extreme people. For example, Aussies sometimes take their own children to lethal “birds of prey” shows as some sort of hardcore idea of family fun.

Recently, a routine “Eagle Encounter” show at the popular Alice Springs Park Down Under nearly turned deadly: a wedge-tailed eagle used in the usually choreographed spectacle went rogue and attempted to snatch up a six-year-old kid in attendance (Crikey!).

An Instagram user caught the eagle’s razor-sharp talons clinching the hoodie of this terrified little bloke’s sweatshirt, making for a sure-fire viral post.

In the caption, the photographer explains it all:

“At a nature park in Alice Springs we decided to go to a bird show the young boy in the green kept pulling his zipper up and down,” the caption reads. “For some reason the Wedge Tailed Eagle did not like it and instead of flying over to the log he is meant to for a photo opportunity he flew straight at the young boy and attacked him.”

But the little mate walked away with nothing but a mere scratch on his face.

“The show was quickly cancelled and the boy taken off to first aid,” the post continues. “Those talons are huge he was a very lucky young boy.”

He is a lucky little bludger indeed. Wedge-tailed eagles are the largest birds of prey in Australia (home to all things deadly) and have a wingspan that can surpass nine (!!!) feet. They can reportedly snatch up animals up to 10 pounds.

Rabbits, birds, and lizards are all fair game, but this petulant kid in a green hoodie was just heavy enough to escape.