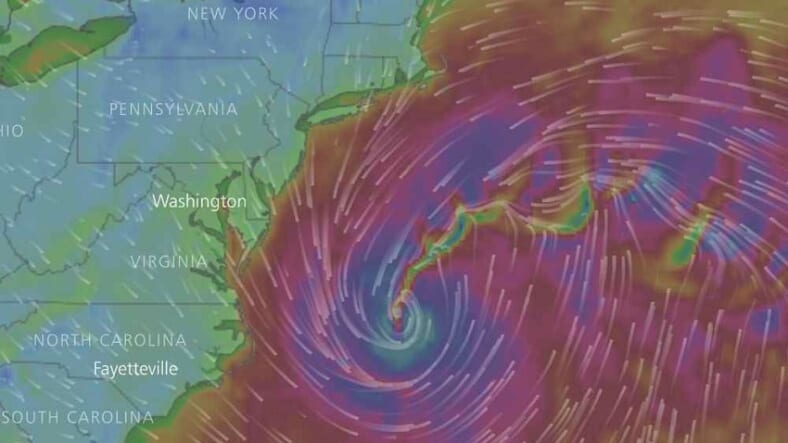 Everybody talks about the weather, sure. It’s what you fill time with in the kinds of conversations you’ll quickly forget.

Unless the conversation involves a winter storm with the power of a category 2 hurricane bearing down on major East Coast cities.

The Weather Channel has dubbed the cyclone menacing New England “Grayson,” a kind of mild-mannered-sounding name. But it’s a monster. In case you think all the talk about this storm’s severity is hype, here’s the Washington Post:

First, a monster ocean storm is taking shape, which pasted parts of Florida, Georgia and South Carolina with rare ice and snow early Wednesday. By Thursday, the exploding storm will, in many ways, resemble a winter hurricane, battering easternmost New England with potentially damaging winds in addition to blinding snow. Blizzard warnings have been issued for the Virginia Tidewater region up the coast to eastern Maine, including Ocean City, Atlantic City, eastern Long Island, Boston and Portland.

“Resembling a winter hurricane” is enough to have anyone in the path of this thing ready to binge-eat any unwary neighbors in the apocalyptic aftermath, which will include sub-zero temps.

The National Weather Service, one of the most sober and careful groups of meteorologists out there, hasn’t minced words either. After all, this storm will undergo something meteorologists call “bombogenesis” as it begins to impact the northeast—literally become a bomb cyclone.

If you’re a Patriots hater and it gives you pleasure to envision Gillette Stadium smothered beneath the beginning of a thousand-year glacier, sorry—it won’t quite be that bad. A blizzard warning currently runs from south of Boston up through Maine, with heavy snow and high winds expected in eastern Pennsylvania and Long Island as well. Coastal winds could reach Category 1 hurricane speeds of 75 mph and gust as high as 50 mph even 100 miles from the ocean.

There’s definitely some kind of doom in New England’s future.