There’s a New Twist in the El Chapo Saga, And It Involves the Obama Administration

This doesn’t look good for the White House at all. 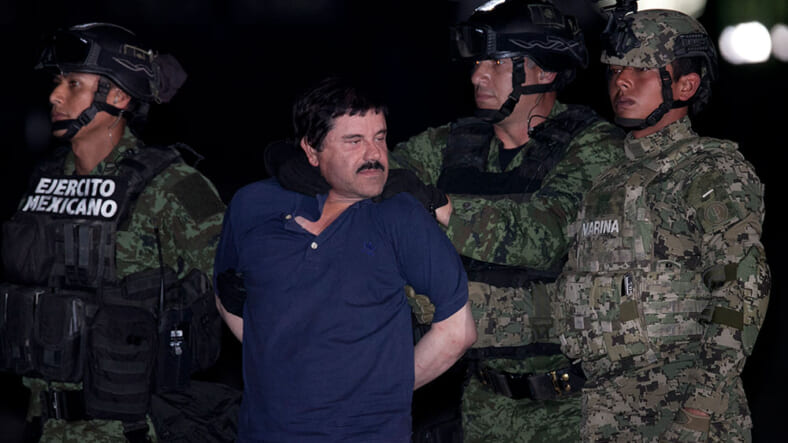 A firearm removed from one of Joaquin “El Chapo” Guzman’s hideouts may give members of the Obama administration a bit of a headache. An Associated Press report published that indicated that out of 19 guns recovered after El Chapo’s capture, one, a .50 caliber rifle, was traced back to the Bureau of Alcohol, Tobacco, Firearms and Explosives’ failed (and controversial) 2010 “Fast and Furious” gun-running sting.The AP reports:

Officials say the weapon was one of 19 firearms that Mexican authorities said was recovered from the hideout and was the only one determined to be associated with the botched sting operation, in which the Bureau of Alcohol, Tobacco, Firearms and Explosives allowed gun-runners to buy weapons in hopes of tracking them and disrupting gun smuggling rungs.

The rifle was bought in July 2010 in a straw purchase by someone not known to ATF at the time. The buyer was later identified and came under investigation but was never indicted. The weapon is not known to be associated with any other crime, the Justice Department says.

No other weapons taken from Joaquin Guzman’s Sinaloa hideout were linked to Fast and Furious.

Fast and Furious was a covert effort that allowed gun-runners to purchase weapons the ATF could track to smugglers. To date, the ATF has recovered 885 of the weapons that were used for so-called “straw purchases.” Unfortunately, a good number of guns connected with Fast and Furious have been tied to violent crimes, including a Mexican border shootout in 2010 that killed Border Patrol agent Brian Terry.One of the most notable incidents was the attempted August 2015 terrorist attack in Garland, Texas by Nadir Soofi and Soofi’s roommate, Elton Simpson. Soofi, who was killed by police during an attempted attack on a ‘Draw Muhammad’ contest, had a 9 millimeter handgun in his possession he’d purchased from the Fast and Furious operation.

The AP reported that a memo written March 15, Assistant Attorney General Peter Kadzik told legislative leaders that the DoJ and the ATF “deeply regret that firearms associated with Operation Fast and Furious have been used by criminals in the commission of violent crimes,” especially crimes that resulted “in the deaths of civilians and law enforcement officials.”

So El Chapo not only allegedly crossed the U.S.-Mexico border a couple of times while on the run from law enforcement agencies in both countries, but had ATF guns in his armory too. If that ends up being the case, the Obama administration might want to rethink his extradition, just in case there are more embarrassing revelations to come.