El Chapo Was Planning a Movie About His Life

It was probably a bad idea, from his perspective. 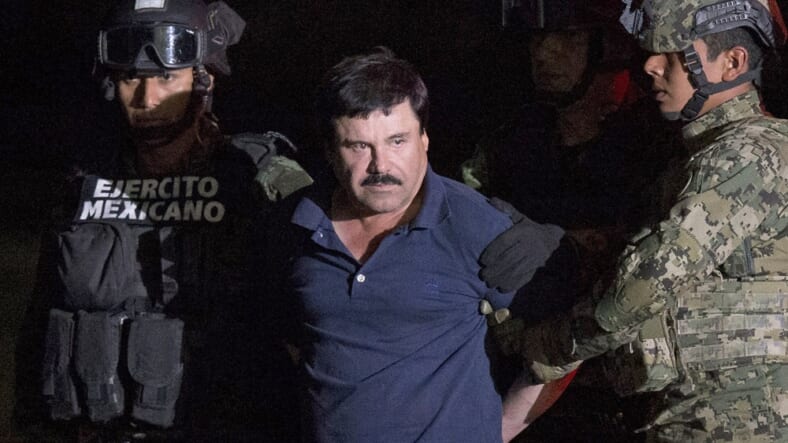 In the end, Joaquin “El Chapo” Guzman’s vanity may have been what put him behind bars again. When the world’s most wanted drug lord was taken into custody Friday in the Sinaloa State city of Los Mochis, he was reportedly planning a biopic.

Hindsight is 20/20, but the New York Post reported Mexican Attorney General Arely Gomez said making plans for a film was the thing that fingered Mexico’s public enemy number one:

“An important aspect in determining his location was having discovered Guzman Loera’s intention to film a biopic, to which end he had contacted actresses, actors and producers,” Arely Gomez told reporters Friday at the Mexico City International Airport.

She said surveillance work allowed investigators “to document the meetings of (Guzman’s) attorneys with these people.”

There is no doubt that Joaquin Guzman Loera’s life has all the makings of a true crime epic. After all, getting him behind bars and away from controlling his global drug trafficking empire was just as important to the United States as it was to Mexico.

While Guzman’s bravura July, 2015 escape from a supposedly super secure Mexican prison was an embarrassment to that nation’s government, El Chapo has long been a target of U.S. law enforcement, who would love nothing more than putting him on trial in an American courtroom.

Proof—soon after El Chapo’s apprehension, Chicago’s Crime Commission called for his extradition to the United States. J.R. Davis, who heads the Commission, said El Chapo’s ability to dodge Mexican authorities demonstrated “that even the most ‘high security’ Mexican prisons are not equipped to hold him.”

Guzman is considered Chicago’s Public Enemy Number 1 because his Sinaloa Cartel has its tentacles firmly wrapped around distribution of that city’s illegal drugs. Next to Guzman, said J.R. Davis, legendary mobster Al Capone “looks like an amateur.”

During a firefight with Mexican marines on Friday, El Chapo almost made another slick getaway, reportedly fleeing through the sewers only to be arrested after stealing a car.

No one wants to glorify the life of a man who by some estimates may be responsible for the deaths of as many as 34,000 people—but we have to admit we’d watch a movie about El Chapo just for the drama of his series of amazing escapes.

A series which—if American authorities are correct about the porous nature of Mexican prisons—may not be over yet.