El Chapo Allegedly Entered the U.S. Twice While on the Run

This should go over well. 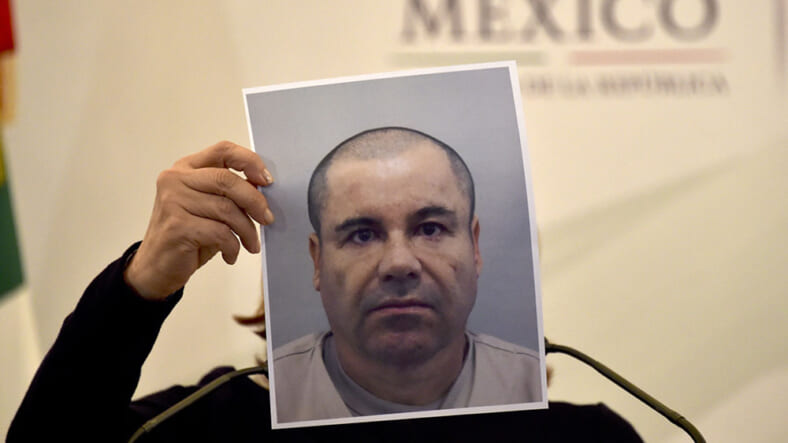 If the adult daughter of drug lord Joaquin “El Chapo” Guzman is to be believed, the leader of the Sinaloa Cartel twice thumbed his nose at international justice by visiting the United States while on the run in late 2015. In a report published by the Guardian, Rosa Isela Guzmán Ortiz indicated her father slipped past American scrutiny with the help of Mexican authorities.

The timing of El Chapo Guzman’s visits to the U.S. might be particularly galling to American and Mexican authorities who were attempting to track him around the time he gave an interview to actor Sean Penn and telenovela star Kate del Castillo:

Rosa Isela Guzmán Ortiz said that shortly after an interview with Hollywood star Sean Penn last year, her father dodged a massive manhunt with the complicity of corrupt Mexican officials and evaded US border controls to sneak into California – despite being one of the world’s most wanted fugitives.

Even as the 39-year-old Guzman Ortiz was revealing how cagey and connected her father truly is, she told the Guardian El Chapo “is not a criminal.” The guilty party, said the American businesswoman, is “[the] government.”

For his part, El Chapo has ceased denying charges against him and has recently been open to the possibility of extradition to the United States—in part, it seems, to escape harsh prison conditions in Mexico.

Asked for further details about her father’s trip into the United States, Guzman Ortiz declined to detail precisely how the man who was perhaps the most wanted fugitive in the western hemisphere at the time managed such a feat. She did say her father had errands to run while in the U.S.. He “deposited the money in a bank account with a lawyer,” Guzman Ortiz told the Guardian, “and a while after he came to see the house, his house. He came twice. “

The money Guzman Ortiz referenced her father ferrying into the United States had a purpose. “All I know is that my dad told his lawyer to deliver some [checks] to [a politician’s] campaign,” she informed the Guardian, “and asked that he respect him.”

The big question is probably just which politician currently running for office is—perhaps unknowingly—receiving donations from El Chapo’s pockets? The answer to that could certainly end up being one hell of a hot potato for any candidate during an election season.