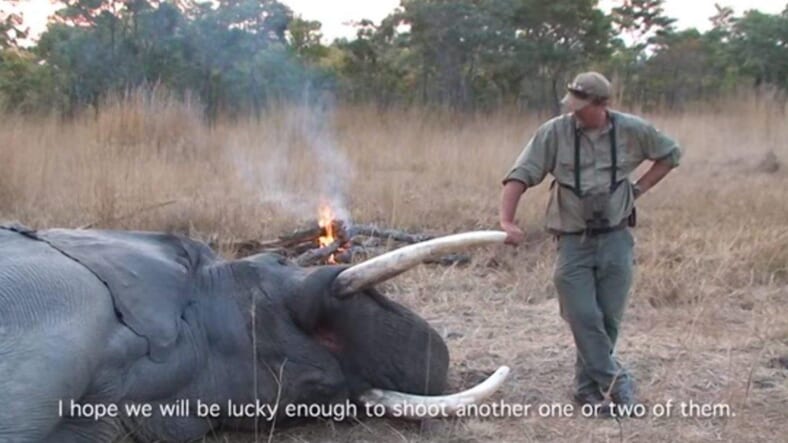 A big-game hunter who died after being crushed by a falling elephant that was shot by another member of his group is not getting much sympathy online.

Theunis Botha was leading clients through a big-game reserve in Zimbabwe on Friday when the group reportedly ran into a herd of breeding elephants, three of which charged at him, reports the Telegraph.

The 51-year-old South African fired his rifle at the charging cows, but a fourth elephant grabbed him with its trunk, at which point one of the other hunters shot and killed it.

Unfortunately for Botha, the dead elephant landed right on him and killed him instantly.

Founded on “a mutual love for Africa and its natural beauty,” his company, Theunis Botha Big Game Safaris, claims to have “perfected leopard and lion hunting safaris with hounds.”

Ironically, Botha was close friends with Scott van Zyl, a hunter who was also killed in Zimbabwe last month. He was eaten by crocodiles.

Damn, that’s harsh. But even rougher is the treatment that Botha is getting on Twitter by those who applauded the dead elephant’s revenge:

A trophy hunter dying is great by itself. Even better when they die in a retarded way. Crushed by a falling elephant. #TheunisBotha

When you look up poetic justice in the dictionary, it should say "See Theunis Botha."

Great news for pachyderm!!! I am actually smiling at nature's SCORE!!! #elephants https://t.co/zJ0gg2yCtI

Karma sure can be a bitch sometimes.