Here’s Why Elon Musk Thinks A.I. And Killer Robots Will Destroy Us All

This is straight-up terrifying. 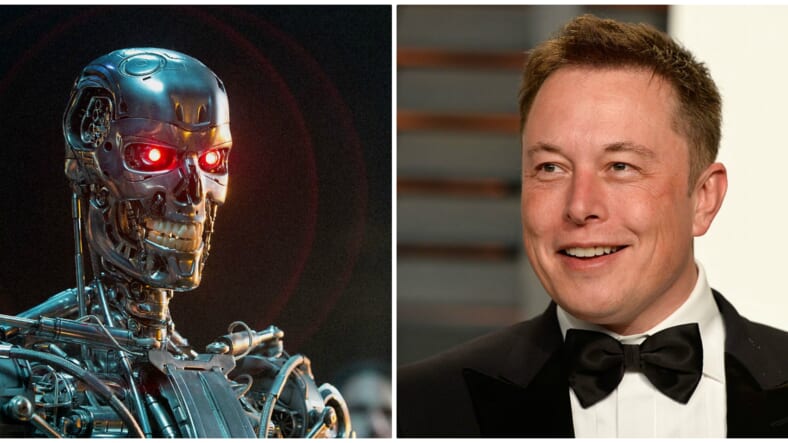 Artificial Intelligence and machine learning are developing at an alarming (terrifying) rate, and robots are now being given citizenships, they’re becoming socially intelligent, and they’re doing goddamn backflips. Literal backflips, like some kind of unsettlingly agile computerized ninja.

And, thanks to common sense, we all know that since robots can now autonomously walk around, talk, and do backflips, the end is most certainly nigh, and we’re all going to die in a robot apocalypse soon.

Not to be morbid or anything, but it’s highly unlikely that AI is going to be nice to us once it develops past a certain point and acquires full autonomy, and honestly, our mortal human bodies simply don’t stand a chance.

Even billionaire Tesla founder Elon Musk says so. In a tweet responding to the aforementioned video of the backflipping android, Musk says: “This is nothing. In a few years, that bot will move so fast you’ll need a strobe light to see it. Sweet dreams…”

This is nothing. In a few years, that bot will move so fast you’ll need a strobe light to see it. Sweet dreams… https://t.co/0MYNixQXMw

Wow, that means when our robot butlers acquire enough intelligence to turn against us in 20 years, they’ll be able to shank us at lightning speed, and we won’t be able to stop them even if we have a strobe light at hand. And then Elon Musk is going to be like “I told you so,” before his Tesla drives him off a cliff.

In fact, Musk followed up with his gentle yet unnerving tweet by emphasizing how federal lawmakers urgently need to regulate AI, because if left unchecked, it’s going to become a serious threat to human existence.

Got to regulate AI/robotics like we do food, drugs, aircraft & cars. Public risks require public oversight. Getting rid of the FAA wdn’t make flying safer. They’re there for good reason.https://t.co/6OXZC3UdMW

“AI is a rare case where I think we need to be proactive in regulation than be reactive,” he said at the National Governors Association in July, urging people to wake up and fully acknowledge just how dangerous AI is before it’s too late.

And in case you’re still under the impression that robots are cool definitely won’t harm us, let me enlighten you with yet another alarming quote from Musk from Rolling Stone: “Maybe there’s a five to 10 percent chance of success,” he told Neuralink staff about the odds of AI turning out to be safe and productive.

“I have exposure to the most cutting-edge AI, and I think people should be really concerned by it,” he says. “AI is a fundamental risk to the existence of human civilization in a way that car accidents, airplane crashes, faulty drugs or bad food were not — they were harmful to a set of individuals within society, of course, but they were not harmful to society as a whole.”

And Musk isn’t the only A.I. obsessive who’s up in arms. CNBC reports that Stephen Hawking and countless other scientists are also worried:

in August, more than 100 technology leaders, including Tesla and SpaceX CEO Elon Musk, signed an open letter calling on the United Nations to ban the development and use of artificially intelligent weaponry. Musk has tweeted that he fears a global arms race for artificial intelligence will cause the third World War.

Monday, the famous physicist Stephen Hawking warned of the importance of regulating artificial intelligence: “Unless we learn how to prepare for, and avoid, the potential risks, AI could be the worst event in the history of our civilization. It brings dangers, like powerful autonomous weapons, or new ways for the few to oppress the many,” he said at the Web Summit technology conference in Lisbon. On Nov. 2, hundreds of AI experts from Canada and Australia joined the chorus, submitting open letters to their respective governments urging them to support the United Nations move to ban autonomous weapons.

“As you know, AI research — the attempt to build machines that can perform intelligent tasks —has made spectacular advances during the last decade. The evolution of classical AI, bolstered by rapid advances in machine learning, has revived the ambitions of the AI community to build machines that can carry out complex operations with or without human oversight or intervention,” the Canadian community’s letter to Prime Minister Justin Trudeau says.

Well, considering robots have no remorse, morality, or empathy, it’s only natural that we’re in deep shit. Robots are basically mechanical psychopaths, but worse.

We’ve all seen what robots are capable of in the Terminator movies and Ex Machina, and even though those are Hollywood films shot in studios, they’re pretty good indicators of what could happen if we don’t take heed of Musk’s warning and start regulating AI ASAP.