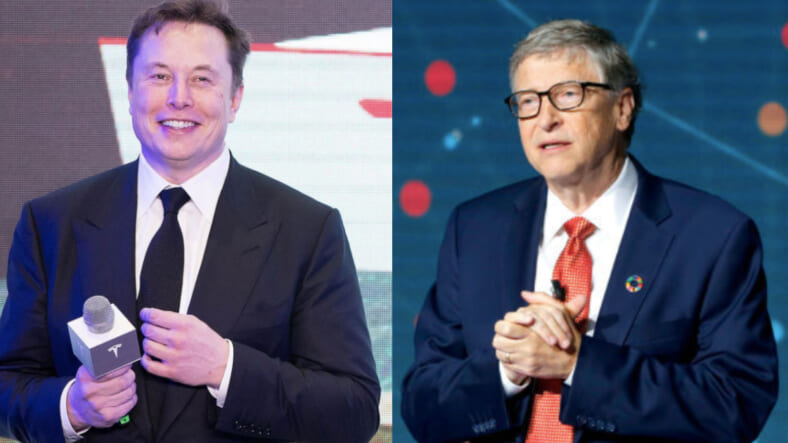 Billionaires: They’re just like us. Kind of. At least they talk smack at each other like regular folks and a verbal skirmish between wildly wealthy captains of industry Elon Musk and Bill Gates is just the latest example.

Musk went after Gates on a podcast, calling him a “knucklehead” in response to criticism from the Microsoft founder regarding the Tesla founder’s understanding of developing a possible vaccine for the coronavirus.

In July, Gates commented during a CNBC interview in response to a number of things Musk has said regarding COVID-19.

“He makes a great electric car,” Gates said, “And his rockets work well. So, you know, he’s allowed to say these things. I hope that you know, he doesn’t confuse areas he’s not involved in too much.”

At the time, Musk tweeted a joke riffing on Michael Jackson’s “Billie Jean” in response.

Appearing this week on the podcast Sway, Musk kept the trash talk going. Host Kara Swisher questioned him about some of the things he’s said regarding the pandemic—Musk hasn’t hesitated to issue skeptical and perhaps glib statements about it via Twitter—and he got pissed.

Musk told Swisher he and his team have “also spent quite a lot of time with the Harvard epidemiology team doing antibody studies. Tesla makes the vaccine machines for CureVac. Gates said something about me not knowing what I was doing.”

Musk continued, “It’s like, hey, knucklehead, we actually make the vaccine machines for CureVac, that company you’re invested in.”

The coronavirus panic is dumb

That said, danger of panic still far exceeds danger of corona imo. If we over-allocate medical resources to corona, it will come at expense of treating other illnesses. Track graph at bottom of this page: https://t.co/7nWKjiZyFn

Exactly. My guess is that the panic will cause more harm than the virus, if that hasn’t happened already.

Then he doubled down on previous statements (see a selection above) and said people had reacted irrationally to the virus—and that neither he nor his family would get vaccinated once one became available.

“I’m not at risk for COVID, nor are my kids,” said Musk, tempting fate.

Newsweek notes that Musk and Gates have been slap-fighting for a while:

It’s far from the first time Musk and Gates have indirectly bickered online. In September, Musk said on Twitter that Gates had “no clue” about electric vehicles after the Microsoft co-founder appeared to snub Tesla’s offerings in a blog the month prior.In March, as the novel coronavirus was first rapidly spreading in the U.S., Musk wrongly predicted that U.S. cases would be “close to zero” by the end of the next month.

The coronavirus death toll in the U.S. surpassed 200,000 within the last week or so. Seven million people have contracted the virus worldwide and the total death toll, American fatalities included, is over 1 million.

Many locations that had virtually lifted pandemic lockdowns have seen infection rates begin to rise again. So Gates and Musk can fight all they want, but in the end, whichever billionaire contributes to finding an effective vaccine will win the argument.