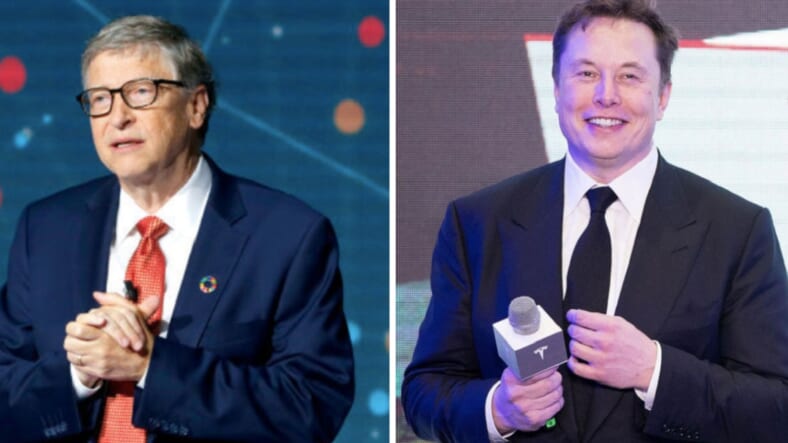 With a  mind-boggling net worth of $181.4 billion, Amazon founder Jeff Bezos probably isn’t worried about losing his top spot as the richest man in the world–but Elon Musk, who in January of 2020 was the 35th-wealthiest, is now number two. Musk initially surpassed Bill Gates, dropping the Microsoft founder back to third, but CNN reported Tuesday morning that thanks to stock market fluctuations the pair were tied.

Musk has Tesla to thank for his new position, as Bloomberg reports the EV maker’s “net worth soared $7.2 billion to $127.9 billion, driven by yet another surge in Tesla’s share price.”

His advance up the wealth ranks has been driven largely by Tesla, whose market value is approaching $500 billion. About three-quarters of his net worth is comprised of Tesla shares, which are valued more than four times as much as his stake in Space Exploration Technologies Corp., or SpaceX.Musk’s milestone marks only the second time in the index’s eight-year history that Microsoft Corp. co-founder Gates has ranked lower than number two. He held the top spot for years before being bumped by Amazon.com Inc. founder Jeff Bezos in 2017.

Gates, perhaps to his credit, may not be all that concerned, as Bloomberg indicates his net worth of $127.7 billion would likely be greater “had he not donated so prodigiously to charity over the years. He has given more than $27 billion to his namesake foundation since 2006.”

Gates and Musk may not remain in a tie for long. In addition to Tesla and his commuter transportation startup The Boring Company, CNN notes Musk also “oversees SpaceX, the space exploration firm that recently kicked off a landmark mission with NASA,” and some “believe there’s still room to run with his company’s stock.”

Musk hasn’t responded publicly regarding the great billionaire horse race, but he did have one word for Tesla’s stock record. In response to a screengrab of the closing price from a follower, he tweeted, “Wow.”