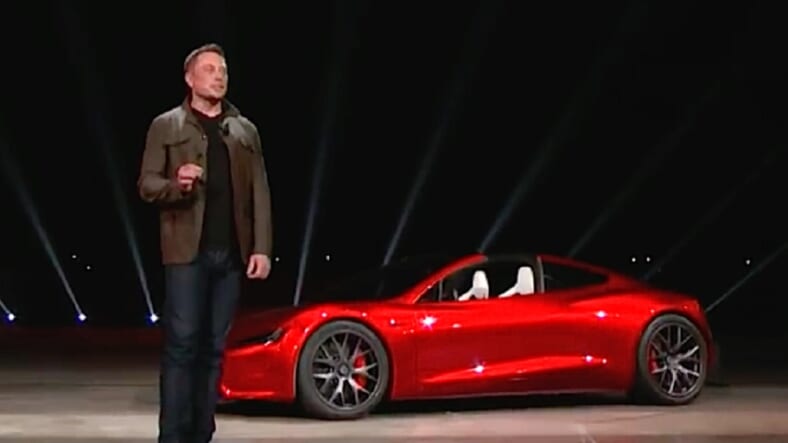 Update: Hilariously enough, Musk was totally fucking with everyone.

Original: Sometimes the line between genius and insanity blurs, and brilliant men say whacko things. Then there’s Elon Musk, who has demonstrated a gift for saying something kind of out there then basically doing it.

In 2016 Musk tweeted that he was tired of sitting in traffic so he would build “a tunnel boring machine and just start digging.” Many thought he was joking. He was not.

Friday night the billionaire who was supposedly one role model for Robert Downey Jr’s Tony Stark tweeted the following:

Falcon Heavy to launch next month from Apollo 11 pad at the Cape. Will have double thrust of next largest rocket. Guaranteed to be exciting, one way or another.

Payload will be my midnight cherry Tesla Roadster playing Space Oddity. Destination is Mars orbit. Will be in deep space for a billion years or so if it doesn’t blow up on ascent.

Granted, if anyone can afford to sacrifice a Tesla to the vast depths of space just to play “Space Oddity” for alien ears to hear, it’s probably Elon Musk.

Reactions to Musk’s tweets weren’t as incredulous as you’d expect, others were pretty critical.

Just to reiterate, the payload for the first Falcon Heavy rocket will be a Tesla electric car, playing Space Oditty, heading for Mars.

I love that Elon Musk is taking Bowie to Mars 👽🚀🎸⚡ https://t.co/UqNZw0wKgE

In space no one can hear Space Oddity :]

There are many arguments to be made about whether Musk’s idea is silly or in a way just plain insensitive, given what a man with his means and creativity could do for so many.

However there’s also the Bowie factor. If there’s a more perfect song and singer to have out there in the void, we can’t imagine it.

So enjoy a little “Space Oddity” below and keep an eye out to see if Elon Musk was just fucking with us. Chances are, he wasn’t.