The Tesla mogul calls it  “the people’s crypto.” 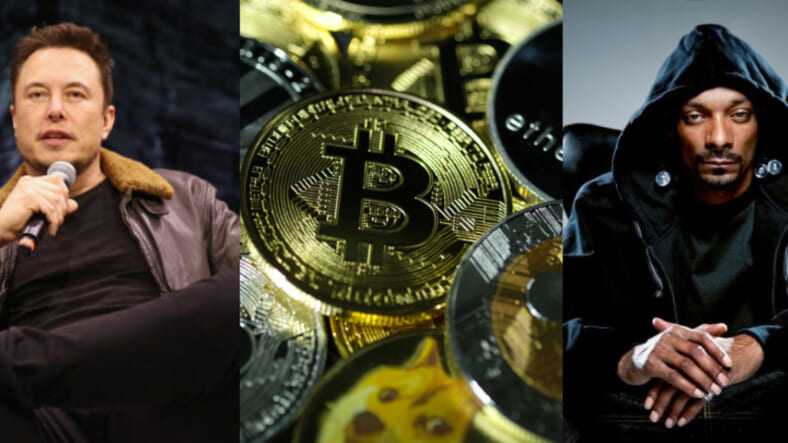 Billionaires, celebrities, and celebrity billionaires are into cryptocurrency, the digital currency so well-secured by cryptographic code that it’s supposed to be impossible to counterfeit.

When it comes to tweeting about crypto, the most recent star of the virtual money realm is Dogecoin, a cryptocurrency that was supposedly first created as a joke riff on the “Doge meme,” which featured a demure and slightly freaked-out looking Shiba Inu looking sideways at her owner’s camera.

This doge’s (sometimes pronounced “dohj”) best friend? Tesla billionaire Elon Musk and no less than Snoop Dogg himself, just to name two. In fact, thanks primarily to Musk, the extremely low-cost cryptocurrency recently had it’s biggest one-day bounce ever, rising 37 percent in just 24 hours to $0.084945, according to CNBC.

CNBC has details on how celebrity recognition is boosting the one-time joke coin:

Dogecoin’s stellar run has boosted its market value to over $10 billion, making it the No. 10 digital coin on CoinMarketCap’s ranking. At its intraday peak Monday, trading volume in dogecoin had reached around $16.9 billion in the previous 24 hours.

But Elon Musk wouldn’t be that whacky, unpredictable billionaire we know and love—or are at least kind of puzzled by—if he didn’t end up throwing a monkey wrench into the crypto works by saying that tweets about “Dogecoin” being the “people’s crypto” were jokes. He’s really a classic Bitcoin guy, and Tesla is a Bitcoin-loving company. More from CNBC:

Musk subsequently threw his support behind bitcoin, saying it is “on the verge of getting broad acceptance” in finance. In an SEC filing Monday, Tesla said it has bought $1.5 billion worth of bitcoin and will accept the cryptocurrency for payment of its products.

Jokes or not, Musk has certainly influenced Dogecoin’s trajectory, and he’s been getting others in on the joke, like Snoop Dogg, who tweeted this weirdly funny image at Musk on Monday afternoon.

KISS rocker Gene Simmons has been into crypto as well. Though he has tweeted that he isn’t “recommending any of this to anyone, he also admits he’s purchased various forms of crypto, including the most valuable, Bitcoin, and its distant second-most valuable rival at the moment, Ethereum.

I’m not recommending any of this to anyone. But yes, I bought and/or will own Bitcoin, Etherium, Litecoin and others.

For anyone who might own some of the still very inexpensive Dogecoin and is anticipating cleaning up the next time a famous person gets on the Doge Train, CNBC provides a bit of caution, noting that this “episode is reminiscent of the late-2017 crypto craze, when bitcoin’s price skyrocketed to almost $20,000 before plummeting close to $3,000 the following year.”

Of course, thanks to Musk and Tesla going in on Bitcoin, it also reached a high today, topping out at $44,000 in value at one point.

Crypto is getting interesting, to be sure, but it definitely remains a case of buyer beware, for now.