Elon Musk Blasted a Tesla Into Space on the Biggest Rocket Ever, And Its Livestream Will Blow Your Mind

This is seriously out of this world. 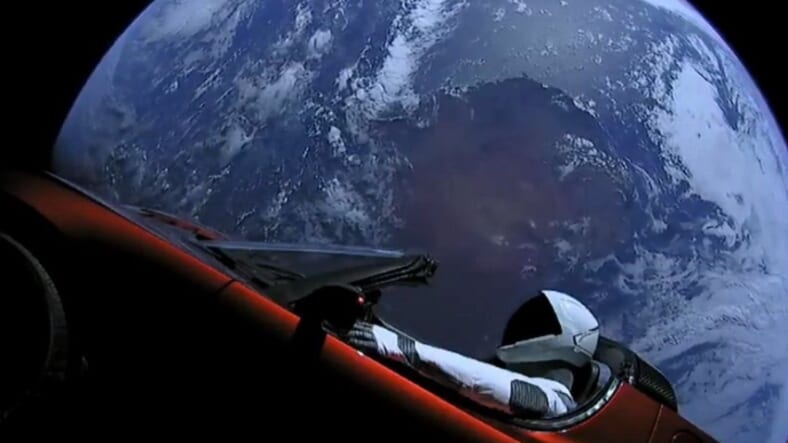 The incredible high-definiton livestream above is coming from the loneliest Tesla Roadster in the universe. It’s being beamed from a camera mounted on the spacecraft Elon Musk‘s SpaceX originally meant to send to Mars with its Falcon Heavy, the biggest rocket ever made.

The launch went off without a hitch. Musk couldn’t hide his enthusiasm at sending the car—and its mannequin pilot, “Starman”—on such an incredible journey,especially after the Falcon Heavy returned to Earth and stuck the landing.

Falcon Heavy side cores have landed at SpaceX’s Landing Zones 1 and 2. pic.twitter.com/oMBqizqnpI

View from SpaceX Launch Control. Apparently, there is a car in orbit around Earth. pic.twitter.com/QljN2VnL1O

Starman and the Roadster had been slated to circle the Mars forever, but they’ll actually travel beyond the red planet. The AP reports:

Musk says the final firing of the upper stage put his red convertible into a solar orbit that stretches all the way to the asteroid belt between Mars and Jupiter. The original plan had the car traveling no farther than Mars.

At least Musk and SpaceX hope their crazy payload makes it that far. LiveScience had to pull a Neil deGrasse Tyson on that idea.

They say outer space will basically eat the Earth’s first electric vehicle-driving mannequin astronaut long before the asteroid belt bashes the whole thing to pieces, writing that “the energy of stellar radiation” will break the carbon bonds holding the midnight cherry red Roadster together.

The most important thing for Musk, however, is how the mission launch established his Falcon Heavy.

As he told The Verge, he’s demonstrated that “you can launch a giant rocket and have it be commercially viable.” It can “potentially carry people.” And that’s obviously his ultimate goal.

Meanwhile we’ve got some incredible images coming from the Roadster’s moving platform in space. They’re going to get someone else’s imagination going, and space travel will be awesome again.