You won’t believe who wins. 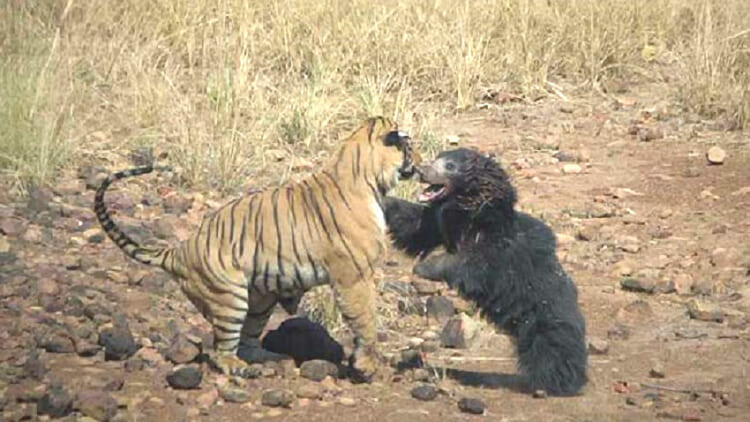 This is seriously insane. Recorded in an Indian national park, this is spliced together footage of protracted battle between a sloth bear and a tiger.

Despite its name, however, the most impressive part of this video is the smaller bear’s astonishing toughness when faced with one of nature’s most vicious predators.

Sunil Nayak witnessed the fight. He told DNA India what it was like.

“Even the guide who was with us felt that this was an extremely rare sight,” Nayak said, “It was quite a close fight.” He said it was thrilling to watch, and he and others there “thought that the tiger will overpower the bear. But the bear knew one thing—that if it gives access to [its] neck to the tiger then she would [lose] the fight and her life.”

Viewers can see what happened next. The bear shielded herself with her legs and curled up to keep her vulnerable parts away from its fangs and claws.” Nayak knew he was watching something remarkable, telling DNA “We were extremely lucky to witness such a fight.”

Tiger vs. bear fights do happen, but a zoologist told the same website that these particular fights really are unusual, and the outcome, in which the bear eventually walks away alive, is a rare event, as researchers have found sloth bear fur in tiger poop in the past.

Beat up as this bear obviously was, she wasn’t going to suffer the same fate.

We’d high five her but that might not end so well.