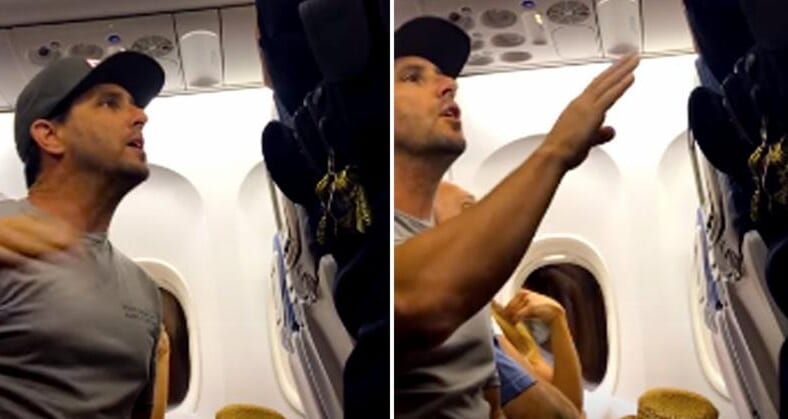 Footage of yet another airline snafu has emerged, and this time Delta is the company in the internet’s crosshairs.

According to NBC News, a California couple claims that the above video shows an incident in which they were asked to give up a seat for their two-year-old son despite having paid for it, or have their entire family kicked off the flight.

Brian Schear, who uploaded the clip to YouTube under the username “Brian S,” can be heard arguing with an airline employee.

“Then they can remove me off the plane,” Schear says in the beginning of the clip. The stakes are quickly raised as an airline employee responds, “So this is a federal offense. You and your wife could be in jail and your kids will be in foster care.”

The man then explains that they bought their older son a ticket on another flight and intended to use this seat for their infant son.

“I bought that seat,” Schear quips back. “You’re saying you’re going to give that away to someone else when I paid for that seat. That’s not right.”

Eventually, an employee tells them that Federal Aviation Administration rules dictate that a two-year-old cannot occupy a car seat, and needs to sit on an adult’s lap.

They’re ultimately told that if they don’t willingly leave, they’ll be kicked off. The father further explained the problem from his perspective in the video’s description:

They oversold the flight and asked us to give up a seat we purchased for my older son that my younger son was sitting in. You will hear them lie to me numerous times to get my son out of the seat. The end result was we were all kicked off the flight.

They then filled our 4 seats with 4 customers that had tickets but no seats. They oversold the flight. When will this all stop?

It was midnight in Maui and we had to get a hotel and purchase new tickets the following day.

The Schears also claim that they weren’t reimbursed for their trouble. Delta said they’d offered the family compensation in a statement made after the clip was watched over 2 million times.

We are sorry for the unfortunate experience our customers had with Delta, and we’ve reached out to them to refund their travel and provide additional compensation,” the company said in the statement. “Delta’s goal is to always work with customers in an attempt to find solutions to their travel issues. That did not happen in this case and we apologize.

You’d think that after seeing the shitstorm of bad press clinging to United after a video went viral showing one of their employees violently removing a man from a flight, airlines would collectively be on their best behavior.

At least this time, no one got hit.