‘Being Fat is Not Beautiful’ Sweatshirt Spurs Online Backlash

“We sincerely apologize to all those involved.” 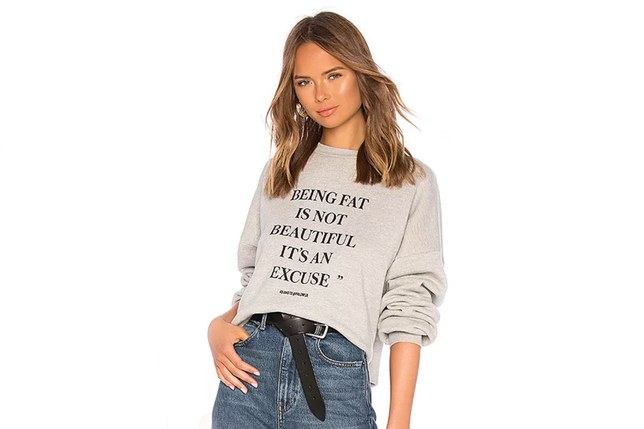 A lot of shirts and sweatshirts out there have some pretty questionable phrases printed on them, but online fashion retailer Revolve is catching all kinds of hell right now for selling a sweatshirt that is…not very well thought out.

The sweatshirt in question, from the brand LPA, reads: “Being fat is not beautiful — It’s an excuse,” and under the quote, says: “as said to @palomija,” referencing a comment left on plus-size model Paloma Elsesser’s Instagram.

Twitter has a lot of feelings about the $168 garment, as well as the model wearing it:

why is no one talking about revolve selling a “being fat is not beautiful it’s an excuse” sweatshirt, that’s so messed up

What is there to say about @revolve's decision to include this sweatshirt in their inventory? That they think it's okay and will resonate with their customer base speaks volumes. pic.twitter.com/9x1xXXyBGR

Florence Given, a London-based artist, got in touch with LPA about the sweatshirts and posted the conversation on Instagram:

Apparently, the point of the shirt was to collaborate with celebrities to shed light on how hurtful internet trolls can be and donate all proceeds to charity, but instead, the end result came out screaming a very different message.

The other designs were to feature similar quotes from Emily Ratajkowski, Lena Dunham — “Horrible Result of Modern Feminism,” Suki Waterhouse — “If you translated a bum onto her face, she’d have a better face,” and Cara Delevingne — “Too boney to be boned.”

However, as a result of the backlash, Dunham took to Instagram to announce that she wasn’t going to be involved in the collaboration anymore. She explained:

“I cannot support this collaboration or lend my name to it in any way. I am deeply disappointed in @revolve’s handling of a sensitive topic and a collaboration rooted in reclaiming the words of internet trolls to celebrate the beauty in diversity and bodies and experiences that aren’t the industry norm.”

For months I’ve been working on a collaboration with LPA through parent company @revolve – sweatshirts that highlight quotes from prominent women who have experienced internet trolling & abuse. This is a cause very close to my heart and the proceeds were meant to benefit charities that help young women by empowering them to express themselves through writing and art. Without consulting me or any of the women involved, @revolve presented the sweatshirts on thin white women, never thinking about the fact that difference and individuality is what gets you punished on the Internet, or that lack of diversity in representation is a huge part of the problem (in fact, the problem itself.) As a result, I cannot support this collaboration or lend my name to it in any way. I am deeply disappointed in @revolve’s handling of a sensitive topic and a collaboration rooted in reclaiming the words of internet trolls to celebrate the beauty in diversity and bodies and experiences that aren’t the industry norm. *** I’d like to especially extend my love and support to @palomija, whose quote was the first to be promoted and mangled. She’s a hero of mine. Like me, she gave her quote in good faith and shared her vulnerability in order to support arts education and to spread her message of empowerment, and she wasn’t consulted in the marketing. Not an ounce of negativity should be sent her way. *** My only goal on this planet is to empower women through art and dialogue. I’m grateful to every woman who shared a quote and so disappointed that our words were not honored. As a result, I will be making a donation to the charity of every woman’s choice who was wronged with me and I hope that @revolve will join me with a contribution of their own. *** P.S. This Rubens painting makes me happy because it’s about women joining in love, but he didn’t recognize diversity at all- he just loved curvy butts. Problematic fave.

Revolve told Yahoo Lifestyle the sweatshirts were intended “as a direct commentary on the modern day ‘normality’ of cyber-bullying and the shared desire to create a community for those most affected by the epidemic.

“We at Revolve sincerely apologize to all those involved – particularly Lena, Emily, Cara, Suki and Paloma – our loyal customers, and the community as a whole for this error,” they added. “The collection has been pulled. We are proud to donate $20,000 to ‘Girls Write Now’ in the hopes that those who need it can still benefit from what was to be a meaningful, insightful and impactful collaboration by LPA.”