People Are Vaping Viagra and Cialis, But Here’s Why It’s NOT a Good Idea

One drawback? It could give you an erection that lasts for two whole days. 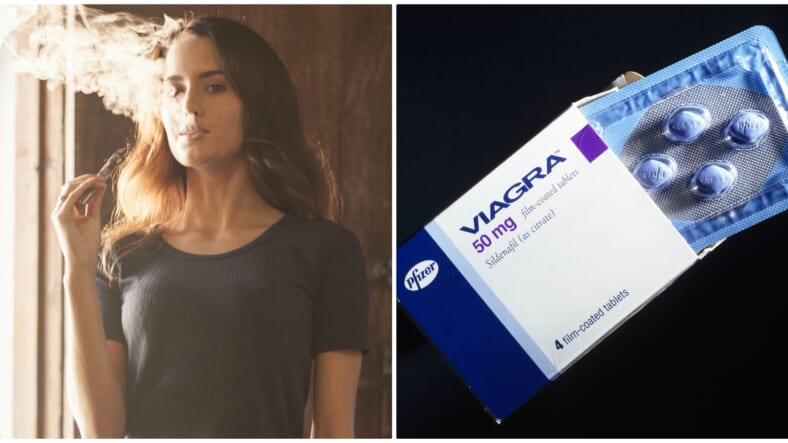 A few weeks ago, the FDA declared that vaping has officially reached “an epidemic proportion,” and announced that it’s shifting the focus of its anti-tobacco campaign from cigarettes to vaping.

But despite this, people literally can’t stop vaping. When they get bored of blowing Boston cream pie-flavored smoke rings, they find new flavors and new liquids to pour into their vapes, like Tide Pods (yes, the laundry detergent), and now, they’re moving on to “Healthcare Flavored” vape juices.

If you’re confused as to what a “Healthcare Flavored” vape liquid is, let me assure you that it’s exactly what it sounds like: Prescription drug flavors.

Apparently, a brand called HelloCig Electronic Technology Co., Ltd was cited for “unapproved new drug violations” by the FDA, because they put actual erectile dysfunction medications into the vape liquid, labeled it “E-Cialis” for blindingly obvious reasons, and sold it to interested vapers.

Of all the ways to treat erectile dysfunction, smoking Cialis is quite literally the last method I’d ever think of, so kudos to this company for their creativity. I mean, of all the ways to take a pill — including crushing it and dusting it over the affected area or absorbing it through osmosis in a pressurized bath — vaping it is one way most people probably wouldn’t think of.

Anyway, the FDA wrote in their warning:

Examples of claims for these products observed on the website that establish the intended uses of the products include, but may not be limited to, the following:

An advertisement for ‘E-Cialis HelloCig E-Liquid’ on Twitter and Tumblr state ‘Cialis’ with an image of the product and a partially undressed couple embracing. The caption states, “WOOOOW, Have you tried our E-Cialis? It is amazing LOL Check out: http://www.hellocig.com/e-cialis-hellocig-e-liquid-250ml.

Aside from the Cialis flavor, HelloCig also sold one called “E-Rimonabant,” which is an anti-obesity medication that was banned for causing mental disorders.

With both of these flavors, the FDA found traces of the actual medications in the vape juices, and both have been deleted from the site.

Furthermore, aside from being a weird way to take pharmaceutical medications, vaping isn’t even effective.

FDA Commissioner Scott Gottlieb said in a statement: “Prescription drugs are carefully evaluated and labeled to reflect the risks of the medications and their potential interactions with other medicines, and vaping active drug ingredients is an ineffective route of delivery and can be dangerous.

“There are no e-liquids that contain prescription drugs that have been proven safe or effective through this route of administration.”