Here’s how it works. 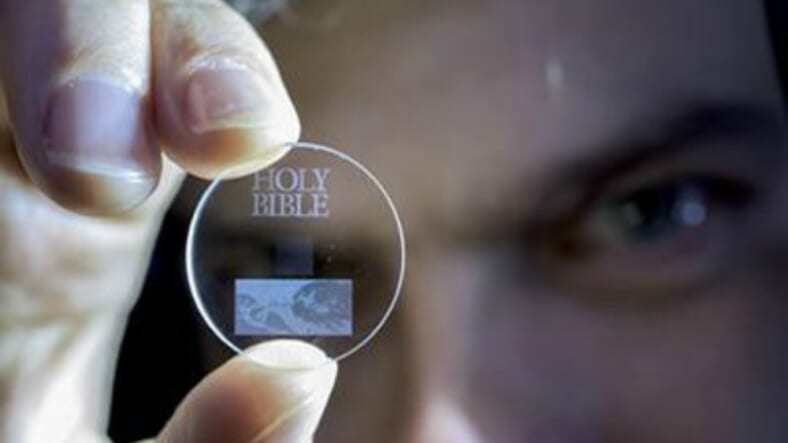 Remember those mystical glowing crystals from the original Superman franchise, the ones that could house the entire scientific and cultural memory of the lost Kryptonian civilization? Now, that insane technology is closer to becoming a reality. Scientists from the University of Southampton‘s  Optoelectronic Research Center (OCR) announced Monday that they had developed a five dimensional (5D) eternal data storage “crystal” that could potentially contain the entire recorded history of humankind for billions of years.“As a very stable and safe form of portable memory, the technology could be highly useful for organisations with big archives, such as national archives, museums and libraries, to preserve their information and records,” the university announced in press release.

The nanostructure glass — quartz — can store up to 360 TB (terabytes) of information, has thermal stability up to 1,000 degrees Celsius, and can last for up to 13.8 billion years. Using ultra fast laser writing (or a “femtosecond laser”), scientists can produce short and intense pulses of light that information in three layers on nanostructured dots, with each dot just five micrometers apart from each other. That’s a lot of storage in such a small space.

The experimental technology was initially introduced in 2013, with a 5D laser encrypting 300 kb of text onto a crystal disc, including Universal Declaration of Human Rights (UDHR), Newton’s Optics, Magna Carta and King James Bible. The storage device was presented to UNESCO at International Year of Light in Mexico.

Dubbed the “Superman memory crystal,” this groundbreaking innovation won’t just put other data storage devices off the market (suck it, Amazon Cloud), but potentially transform the way we preserve all the knowledge and data we’ve gained over the course of human civilization.

“It is thrilling to think that we have created the technology to preserve documents and information and store it in space for future generations,” said Professor Peter Kazansky, from the ORC. “This technology can secure the last evidence of our civilization: all we’ve learnt will not be forgotten.”