Learn the fascinating story behind the glistening gut-bomb. 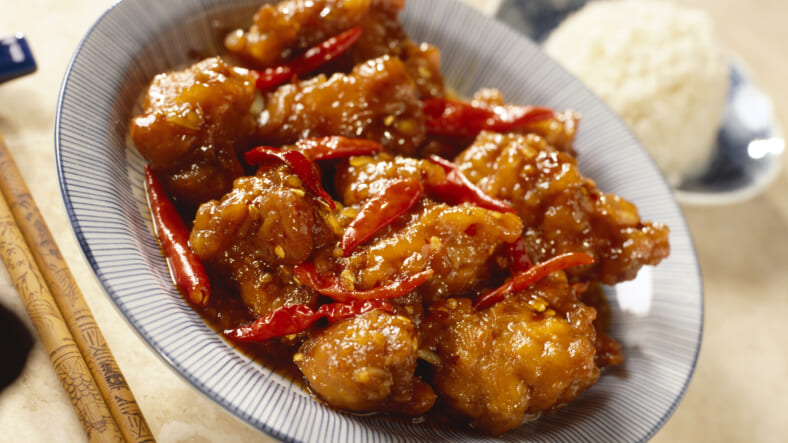 We know you’ve wolfed down your fair share of the spicy-salty stir fry staple known as General Tso’s Chicken. But you’ve likely never given much thought to who invented it—and no, it wasn’t “General Tso.”

A chef named Peng Chang-kuei, who passed away Wednesday at age 98, reportedly conjured it up back in 1952 out of necessity, as he had run out of ingredients to make other dishes. The dire circumstances which led to its creation are fascinating.

Chang-kuei fled the political turmoil of China in the early 20th century. He had been the banquet chef of the Nationalist government during China’s struggles with its future during the time, and when it became clear that the Communist regime was taking over and anyone in the Nationalist government were facing long prison sentences (at best), he escaped to Taiwan to cook for the government in exile. It was there, he later claimed in an interview, that he invented the dish we’d know as General Tso’s chicken in 1952. For a touch of patriotism, he named it after Zuo Zongtang (formerly romanized as Tso), a military leader and statesman well-known in China.

In 1973 Chang-kuei moved to America, where his expertise in traditional Hunan cooking wasn’t nearly as useful in a culinary scene with a predominantly American palate. To adjust, he sweetened up his signature dish and put it on the menu at Peng’s restaurant in midtown Manhattan, where it garnered high-praise. The Americanized version was called a “stir-fried masterpiece” in a 1977 edition of The New York Times.

Chang-kuei eventually returned to Taiwan to open up a restaurant chain called Peng’s Garden that remains successful to this day. But his stateside legacy has been clearly immortalized on the menus of Chinese restaurants across the country.

So go get yourself a plate of General Tso’s in honor of Chang-kuei’s, and be grateful that the delectable dish made its way to America.