This is an all-time classic. 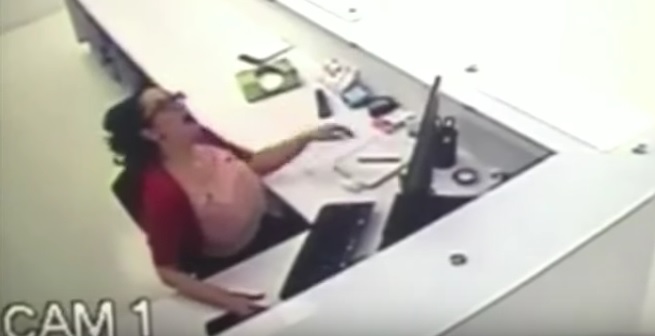 Florida is one of many states that have a big, fat problem: people trying to swindle money from the state for work-related injuries when they’re actually not hurt at all. It’s called workers’ comp fraud, and the problem is the taxpayer gets the bill. Were it not for security cameras in her office, one genius might be collecting a check at home today.

According to a report by Fox 13 News, the woman, Sheyla Veronica White, was startled by a falling sprinkler head. That’s when you see her light bulb moment in the video. This fraudulent mastermind then grabbed the thing and whacked herself in the forehead with it.

The insurance company for White’s employer wasn’t buying it. Detectives investigating the claim naturally requested security footage, and White was pretty much done for. Awk-ward!

White was convicted of workers’ compensation insurance fraud, which is a third-degree felony in Florida. She received 18 months of probation, reports Fox 13, but didn’t have to pay any form of restitution—because she was found out before she received any money.

Given the existence of this video attached to her name, that’s a good thing, because it seems like it might be damn hard for her to ever get a job in Florida again.