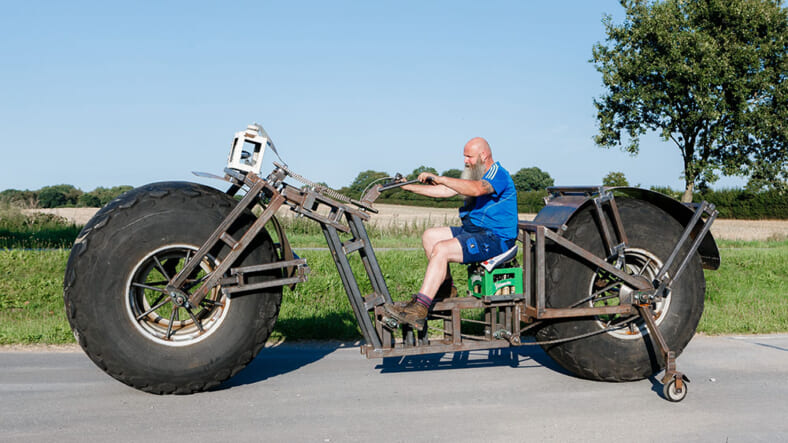 German bike builder Frank Dose is obviously a dreamer. At some point he apparently decided he needed to make his mark, and he’s doing it in a dramatic way, by creating what he hopes will be recognized by Guinness World Records as the world’s heaviest rideable bicycle.

The Associated Press reports Dose has already beat the current record. The previous mega-cycle was a mere 860 pounds. Dose’s two-wheeled monster clocks in at one ton and change.

Dose reportedly used “giant tires from an industrial fertilizer spreader and scrap steel” to create his bicycle behemoth, but he isn’t actually done yet.

He told a German news outlet that before he took the bike for a ride he wanted to further boost its weight up to 2,646 lbs.

According to the AP, Dose’s bike, in spite of the burder of the 5-foot in diameter tires, is “surprisingly easy to ride.”

It isn’t clear whether the Guinness people have officially recognized Dose’s creation yet, but come on, how could they not? Take a look at that monster.

Frank Dose proves it’s pretty fun to go ahead and dream big. But we won’t hold our breath waiting for him to take his gigantic ride on the BMX circuit anytime soon.