Watch This Topless Festivalgoer Strike Back Against Creepy Groper 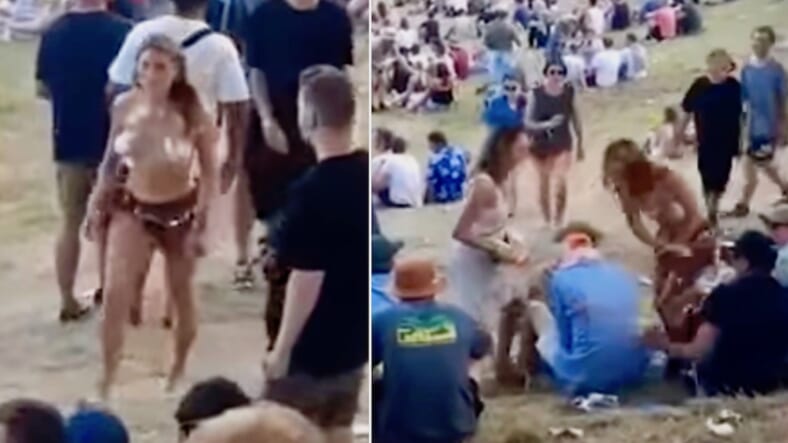 A topless festival goer has defended her viral beatdown of a pervy stranger who groped her “glitter boobs.”

Over New Year’s weekend, 20-year-old Madeline Anello-Kitzmiller was just minding her own business, vibing out at the Rhythm and Vines Festival in Gisborne, New Zealand with her friends. Sure, her breasts were exposed and covered in glitter, but that’s just what the rave kids are doing these days.

But then some creep ran up from behind, groped her breasts and then ran off. (Reminder: a woman flashing her breasts in public isn’t consent for rando strangers to grab them.) Don’t worry, Anello-Kitzmiller chased him down and gave him the beating of a lifetime.

The video of the glitter-boobed warrior bring the hurt quickly went viral on Facebook and then YouTube, but it divided the Internet. Daily Mail Australia reports one Internet troll commented, “Well that’s what she gets when she wears something like that.”

She has since defended her decision to attack the man. “I stand by my actions and hope that I’ve inspired women to feel comfortable in their bodies, no matter how they look, and to stick up for themselves when anybody says otherwise or tries to deny you the right to protect your own body,” she told Daily Mail Australia.

“He grabbed my breast. I hit him. There was a lot of built up anger coming from harassment throughout the day. This happens everywhere, not just New Zealand,” she added.

Let this be a warning to all dudes at music festivals to keep their hands to themselves and away from glitter boobs (unless you’ve been given consent). Got it? Good.