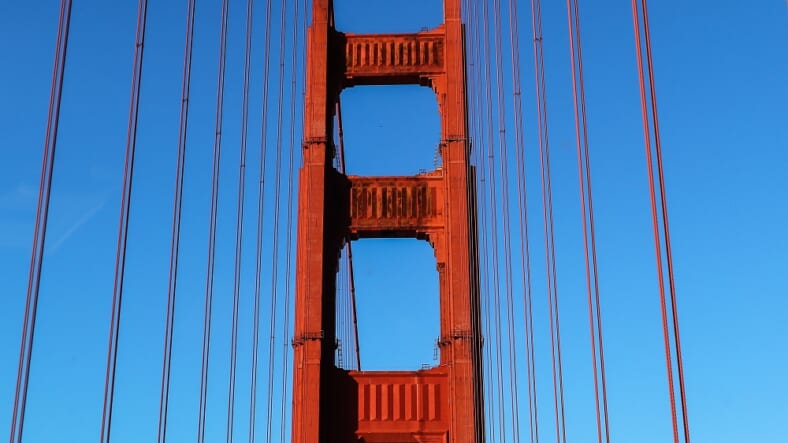 The blow dart is a weapon you might encounter on walkabout in the South American jungle, or in the hands of some creeping movie assassin, not on a stroll across California’s iconic Golden Gate Bridge. Yet two pedestrians reported blow dart attacks while crossing the Golden Gate on Friday.

The San Francisco Chronicle‘s SFGate website reported that the first victim approached a California Highway Patrol (CHP) bicycle officer just before 3 PM Friday. The man had a 5-inch projectile buried 2 inches into his thigh. Police determined it was likely a dart from a blow gun. Then things got a little stranger:

The officer called an ambulance to assess the wound. As emergency personnel were speaking with the man, a woman approached them and said she had been struck in the knee by an identical dart.Both victims were evaluated by paramedics and released at the scene. The CHP took both darts as evidence and sent them to be tested for harmful chemicals.

The Los Angeles Times quoted CHP spokesperson Andrew Barclay, who said he’d “never heard of something like this.”

“It seems very random,” Barclay said, “and it doesn’t appear that either of the victims was targeted for any reason specifically …. Neither of them had had any arguments.”

The Times reported the victims were close to the Vista Point lookout when the incident occurred, and that police determined it was likely the darts were fired from a moving vehicle.

As weird as a blow dart attack on a sunny northern California day may be, this is just the most recent blow dart attack to make the news. A recent Leader Call account indicated that police in Newport Beach, CA have been searching for the person or persons who began targeting birds with blow darts in early January, 2016.

While Newport Beach and San Francisco are over 400 miles apart, the number of sociopathic blow dart enthusiasts in California is likely fairly small.

It ‘d be great if the CHP tracked down the exotic weapon-loving attackers before any more birds or humans have to suffer.