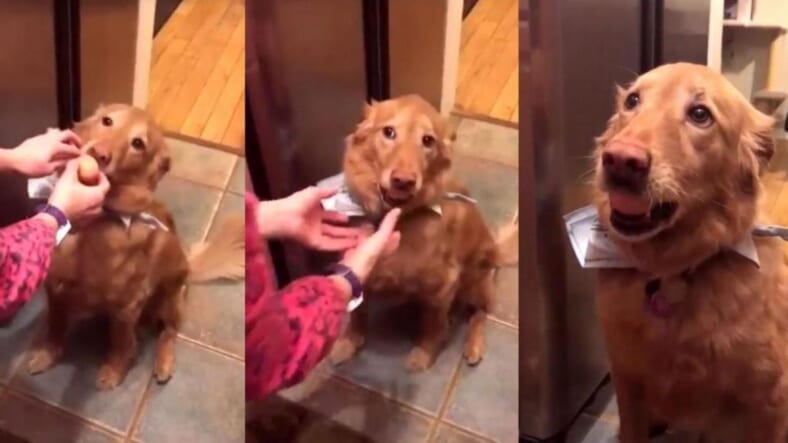 While knucklehead humans are foolishly munching on Tide Pods, much smarter canines are putting something safer in their mouths.

In a new viral trend dubbed the “Golden Retriever Egg Challenge,” pet owners are testing their dog’s ability to hold an egg in its jaws without cracking it open.

Veterinary technician Carrie DuComb got the idea after reading that  Goldens were bred to retrieve hunting game because of their “soft mouths,” hence the challenge.

The above video, which was originally posted to Twitter by DuComb’s niece, went totally viral as it racked up millions of views.

The hashtag “#eggchallenge” began trending as other Golden Retrievers—and a particularly timid Golden Doodle—gave it a try with mixed-and-messy results.

Tried out the Golden Retriever egg challenge with Missy tonight. She was successful and remains a very good girl pic.twitter.com/inRC37V6SN

Cabot tried the golden retriever egg challenge. Turns out he is a very good boy, except the part where he brought it right to the carpet. #eggchallenge #goldenretriever pic.twitter.com/cwYE6f8co3

Other breeds proved to be egg-cellent participants as well.

He didn’t disappoint ❤️
Yes, he was adamant on taking the egg outside.
Who knows what would’ve happened then… pic.twitter.com/dRv8fZ3QWv

Tried doing the golden retriever egg challenge with Watson…. technically it didn’t break in his mouth so 💁🏼‍♂️ labs are just as good. pic.twitter.com/XZbktl890C

I gave my dog an egg and this what he does with it😂 (inspired by the retriever and the egg vid): pic.twitter.com/5cnbomdcs6

We’re still waiting for Tom Hardy to try it with one of his adorable pooches.