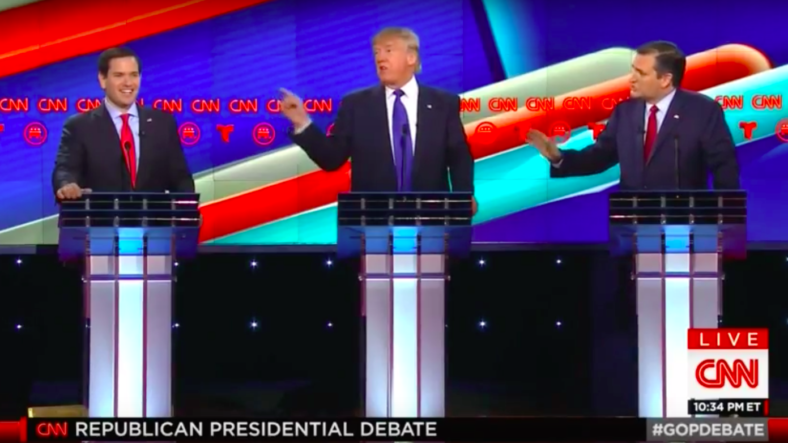 Some people tune in to Presidential debates with a sincere interest in the issues. Eager to honor their sacred duty as democratic citizens, they soberly weigh the candidates’ various policy positions against their own personal beliefs. In time, they arrive at a thoughtful decision, casting their vote for the person best equipped to lead the free world through a chaotic time of economic turmoil, environmental change, and rising global strife.

Must kind of suck to be them.

Most of us just watch for the meltdowns. And last night’s debate delivered big time. This was maybe the most entertaining—and least enlightening—couple of minutes in any debate in the history of our nation:

By the way, the term “basket case,” which Donald Trump used to describe his rival Ted Cruz (at the 1:42 mark), has an interesting history. Commonly employed as a synonym for “crazy person,” it is thought to have originated during World War I, when it referenced rumors of wounded veterans who, having lost both arms and legs in combat, had to be carried around a hospital in baskets. (The idea that this was common was hotly denied by military sources.)

It’s also the title of one of the greatest horror movies of all time—and perhaps the only work of art ever made that that can compete with the sheer insanity of our current political system.

And more recently, it was the title of a very well known song by a band that some people like.

Finally, it’s also commonly used to describe a country that is in total disarray. Perhaps we’ll be hearing it more in the coming years!