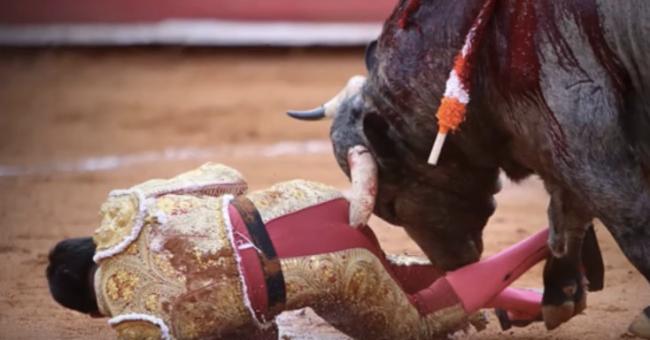 The phrase “that’s gotta hurt!” has probably never been more applicable than in the incident involving a Mexican matador and the bull who brutally gored his anus. (In case you missed it, watch the gruesome scene above.)

Antonio Romero was fighting a half-ton-plus beast named “Caporal” on Monday in Mexico City when he was knocked off-balance by the bull’s massive bucking head and fell to the ground. Then, Caporal came back at him and lodged one of his horns directly into the poor man’s anus. This is hot on the heels (hooves?) of a Spanish matador getting his glass eye knocked out by a charging bull.

A photo from Univision perfectly captures the cringe-inducing moment.

According to SB Nation, doctors determined upon medical examination that nearly a foot of the man’s rectum was damaged by the incident and subsequently proceeded to perform a full reconstruction of his anus and rectum on Monday.

Meanwhile, the footage has been making rounds across the web, including a slowed-down version of the incident.

If you’re the praying type, please clasp your hands together and hope that Romero makes a full recovery.