Here’s how a family of Israeli immigrants became an American business dynasty. 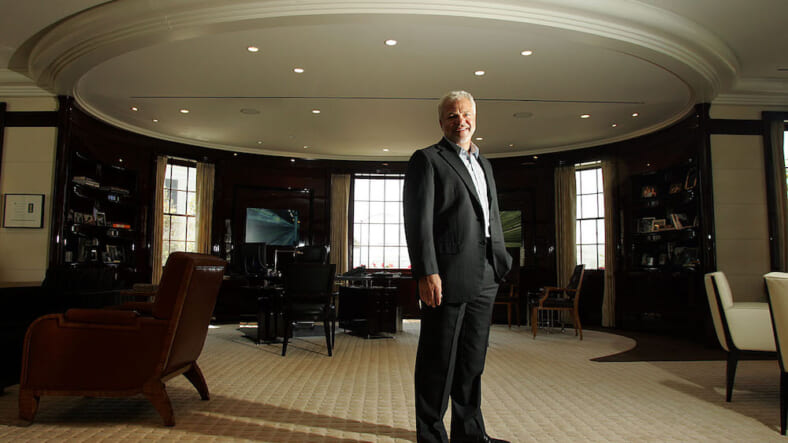 When the Gores family left Israel for Detroit in 1968, they were just about broke. It had taken five years to get a visa; sons Elias, Samir, and Tewfic spoke no English. They were promptly given new American names by their aunt, who picked them up at the airport: Alec, Sam, and Tom. A relative set the family up in a small apartment in Flint, Michigan.

Alec, 15, was the oldest of the three. He began working at his uncle’s grocery store the morning after they arrived, bagging groceries for 25 cents an hour. “My father was willing to give up literally everything he had and pack his bags and bring us here,” Alec told a reporter in 2016. “He did it for the kids, to make sure we have a better future.”

That reporter was from Forbes. Because, as it turns out, the man formerly known as Elias—now Alec Gores, founder and CEO of leveraged buyout firm The Gores Group—has a net worth currently estimated at $2.1 billion.

The other brothers haven’t done too badly, either. Sam, who is a year younger than Alec, is chairman of the Paradigm Talent Agency, which represents top-tier talent including Laurence Fishburne, and handled the career of Philip Seymour Hoffman before the actor’s untimely passing in 2014. Tom, the youngest of the three, runs Platinum Equity, a private equity firm in Beverly Hills, and owns the Detroit Pistons basketball team, which he bought in 2011.

However, it wasn’t a straight shot to success for the Gores boys, who have come to personify the archetypal American dream. Alec didn’t graduate from high school until the age of 20. He then went to Western Michigan University and became the first person in his family to finish college. He took a job at General Motors as a computer programmer, but hated it.

“I like to move fast, and I like to work hard. An 8-to-5 job just wasn’t a fit,” he once told an interviewer. Alec struck out on his own in 1978, getting an $8,000 loan from his dad and setting up a computer hardware and software distribution business in his basement. Eight years later, he sold the company, which employed more than 200 people, for $2 million. Sadly, his father died of cancer shortly after the deal closed.

In 1987 Alec started The Gores Group, which its website describes as having a “single vision to buy, fix, and sell businesses.” The Gores Group acquired more than 100 companies in the years that followed—spanning industries including technology, telecommunications, business services, industrial, health care, and consumer products—resulting in an exceptionally lucrative string of partnerships.

In 2003 Alec launched Gores Capital Partners, a private equity fund, followed by a second fund, Gores Capital Partners II, a few years later. A third fund debuted in 2011, aptly called Gores Capital Partners III. The firm has roughly $2 billion under management, an amount that would have taken Alec 500 million days to earn bagging groceries at his old hourly wage of 25 cents. Of course, not every venture can be a winner. In 2012 Alec made a rare financial misstep, losing $17.4 million in a game of backgammon to Irish gambling legend JP McManus.

Sam Gores worked his way up the Hollywood food chain. He studied acting at the American Academy of Dramatic Arts in New York City, and in 1977 he took a job at The Gage Group, a talent agency headed by well-known industry player Martin Gage. In 1986 he founded his own shop, SGA Representation, and after a series of mergers and acquisitions, the Paradigm Talent Agency was born. With offices in 10 cities and clients including Janelle Monáe and Phish, he’s become one of the top agents in Hollywood—but, while wildly successful, he’s a relative pauper compared to his billionaire brothers.

Tom, the youngest brother, started his career working for Alec at The Gores Group. In 1995 he decided to go it alone, starting Platinum Equity. The firm laid out $226 million to acquire 32 companies over the next five years, resulting in a profit of $940 million. Last year, Platinum Equity closed a deal to acquire the Australia and New Zealand operations of Staples Inc., and relaunched the chain as Winc (work incorporated). Today, Tom, who is number 200 on the Forbes 400, is worth an estimated $3.9 billion.

It’s clear that the Gores family remembers what it was like to have very little; like many wealthy people, they have made philanthropy a priority. During the Flint water crisis, Tom pledged $10 million for relief efforts. He has funded scholarships in the city for underprivileged kids, is on the board of trustees for the Los Angeles County Museum of Art, and previously served on the board of directors at both St. Joseph’s Hospital and UCLA Medical Center.

“We are disrupting generational poverty,” Gores Fredston told the audience at a gala fund-raiser last year. Thus far, Gores Fredston has raised over $17 million to support initiatives for at-risk kids, and it’s a reasonable assumption that this figure will only grow over time.

Just like their father did for them, the Gores brothers are giving kids the possibility of a better future—and if the recipients are anything like their benefactors, that future could turn out to be very bright indeed.