Today Is the Day Boston Drowned in Molasses in 1919

Some claim they still smell the sweetness today. 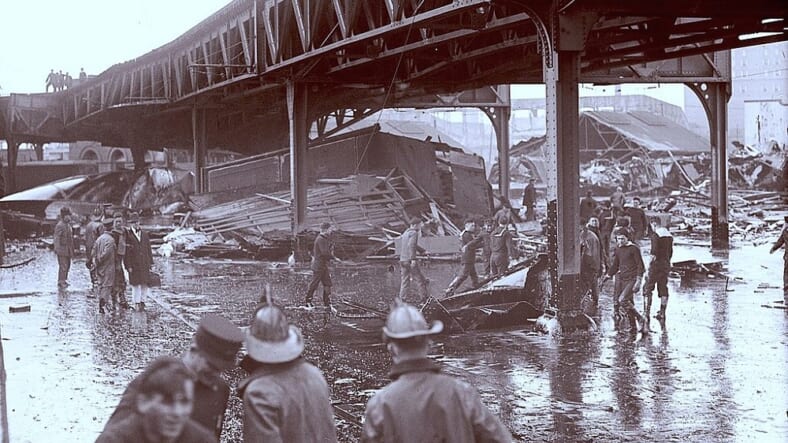 World War I was still a very fresh memory and the Spanish influenza was still raging around the world on January 15, 1919—the day Boston, Massachusetts experienced one of the most surreal, unnatural calamities you’re ever likely to read about: the Boston Molasses Disaster.It’s almost funny at first, the idea that sweet, sticky molasses caused any kind of disaster. But the Molasses Disaster was a nightmare industrial accident that killed 21 people and injured 150. It was a product of the times, bad construction, and New England weather.

The Purity Distilling Company at 529 Commercial Street made ethanol, which could be produced from molasses. And that ethanol was losing value: the 18th Amendment to the Constitution would be ratified on January 16th, 1919, launching the Prohibition Era. Ethanol was also used in munitions, and the end of the Great War in November, 1918 had reduced the military need as well.

Tanks of molasses towered behind Purity Distilling. On January 15th, one of them was groaning. It was huge — five stories tall and 90 feet wide — and it held over 2 million gallons of molasses.

Boston is famously cold in January, but the 15th marked a sudden warm-up with temperatures in the 40s after a long stretch of the usual frigid conditions. It was likely the change in weather, faults in the tank structure and fermenting of the molasses that produced what happened around 12:30 p.m. that day.

The ground shook, there was a massive rumbling sound, then something like the sound of gunfire, as if a small war had suddenly erupted. Then, a thunderclap. An early news service report published the same day in papers across the country described what happened next:

The explosion blew away two of the supporting pillars of the Atlantic Avenue elevated railway structure, demolished several buildings, blew an electric freight car off the track, overturned a number of heavily loaded trucks and killed about a dozen horses.

It took time to determine the final death toll, as clean-up crews were still finding bodies five days after the disaster.

Survivors told of succumbing to an initial tsunami wave of molasses 25 feet high, which raced through the flood zone at 35 miles an hour, inexorably sucking horses and people in and hurling them into the sea.

The clean-up took months but the shock lasted longer. Bostonians spoke of feeling like every surface was sticky, and people claim today that when the weather is warm, you can still smell the cloying, sweet ghost of that long ago dark wave in the area.

Boston’s Molasses Disaster was a landlocked Titanic-like tragedy caused by poor construction practices and also plain bad luck. Learning about it brings visions of being trapped in a terrible syrupy tide, a nightmare made real.

Fortunately, it was also one of a kind. Enjoy some biscuits with molasses soon, and try not to think too much about it.