Talk about a killer look. 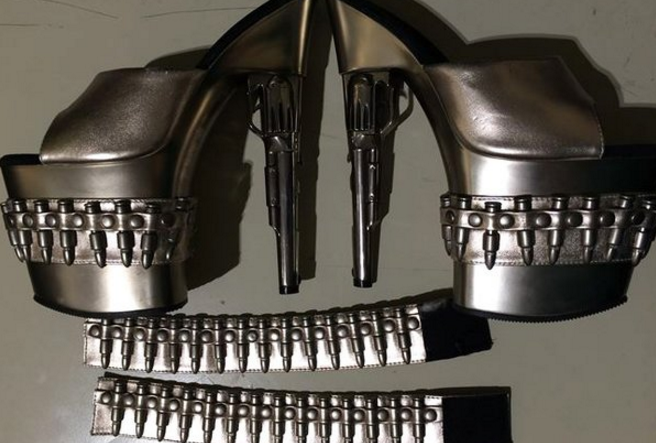 Just when we thought that Transportation Security Administration (TSA) list of confiscated carry-on items was too crazy to handle, a passenger from Baltimore added another bizarre article to the banned inventory: Gun-shaped high heels

A pair of tawdry 7.5-inch bronze-colored stilletos embellished with faux bullets and pistol-shaped heels were discovered in a woman’s carry-on bag at Baltimore-Washington International (BWI) Airport on Sunday.

The stilettos that the unidentified traveler had in her possession — Bondgirl-701-3 Gun Heel Platform Sandals — are made by exotic footwear manufacturer Pleaser USA and are said to be one of their most popular items.They look authentic, but the 7.5 inch gun-barrel heels are plastic, and finished with a chrome coating in order to make them look more realistic, according to Pleaser USA spokeswoman Elody Romero.

TSA spokesman Lisa Farbstein posted a photo of confiscated items on Twitter with a warning to future travelers: “Friendly reminder from @TSA: Realistic replica firearms and ammunition are not permitted past TSA checkpoints.”

Shoes and bracelets that are less than ideal to wear or bring to a @TSA checkpoint. These delayed a traveler at BWI. pic.twitter.com/tZiFkwCBLf

Friendly reminder from @TSA: Realistic replica firearms and ammunition are not permitted past TSA checkpoints.

TSA offered to put items in her checked luggage, but she ended up leaving them with agents in order to catch her flight, which she presumably made after ditching her unwieldy footwear. While that’s probably the smartest move, it’s still probably a loss for her in the end: I mean, talk about a pair of killer shoes.