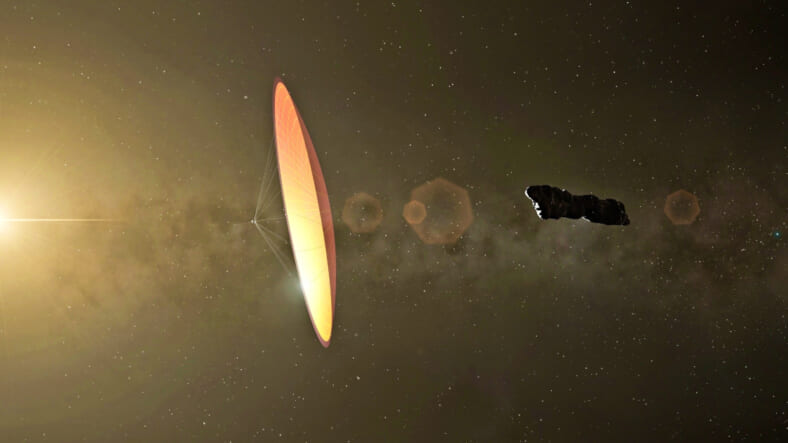 In his upcoming book published by Houghton Mifflin Harcourt, Extraterrestrial: The First Sign of Intelligent Life Beyond Earth, Harvard astronomer Avi Loeb makes a provocative assertion: The mysterious “cigar-shaped object” that NASA dubbed “1I/2017 U1 ‘Oumuamua” was junk from an alien civilization.

“‘Oumuamua” is a Hawaiian word meaning “scout” and the object was discovered by the world’s most powerful telescope, which is located on Mt. Haleakala in Maui. If Loeb is correct about the object’s origin, it was exceptionally well-named.

In his book, Loeb says ‘Oumuamua’s arrival from the depths of interstellar space in late 2017 marked the first solid sign we are not alone in the Universe.

According to Loeb, who is the Astronomy chair at Harvard and who has a doctorate in physics, ‘Oumuamua was another galaxy’s garbage, basically.

The object’s shape and speed were two factors that made it jump out at the first astronomers who discovered it. Loeb writes that “‘Oumuamua’s geometry” was “more extreme by at least a few times in aspect ratio — or its width to its height — than the most extreme asteroids or comets that we have ever seen.”

The oddness didn’t stop there. Loeb also says ‘Oumuamua was up to “ten times more reflective than typical solar system asteroids or comets.” As if, according to the professor, it was made of highly reflective metal.

But Loeb states that it was ‘Oumuamua’s “excess push away from the sun” that moved its possibly alien origin from science fiction to likely fact.

Astronomers can usually reliably calculate the way random interstellar rocks will move around the Sun. In Extraterrestrial, Loeb writes that this visitor from elsewhere didn’t follow a normal trajectory at all. As it floated away from our home star, ‘Oumuamua sped up, in Loeb’s words, “slightly, but to a highly statistically significant extent.”

While comets will speed up as formerly frozen gases melt, no one could find any evidence for this happening with ‘Oumuamua. It appeared to speed away from our Sun on its own. Loeb speculates, in fact, that it might have been designed as a kind of solar sail, a form of propulsion in which thin objects essentially ride solar waves like a sailboat on the water.

Loeb admits he’s received a lot of push-back from other scientists regarding his theory that ‘Oumuamua was essentially space junk discarded or lost by another intelligent civilization, but he believes that the best way to seek ET is to “look for their trash, like investigative journalists who look through celebrities’ trash.”

Avi Loeb also believes there is more evidence floating around out there and we’re entering a time when our technology is finally up to the job of spotting it and analyzing what it sees. It could just be a matter of time before we find enough alien space trash to realize we’re truly not alone and never were.

Though if aliens are really that careless with their junk, humanity might want to stay put. For all we know, we live in the safest neighborhood in the galaxy.

Extraterrestrial: The First Sign of Intelligent Life Beyond Earth by Avi Loeb goes on sale January 26.