Watch Harvey Weinstein Get Slapped By Man At Restaurant

“You’re a piece of sh*t… f*cking with those women!” 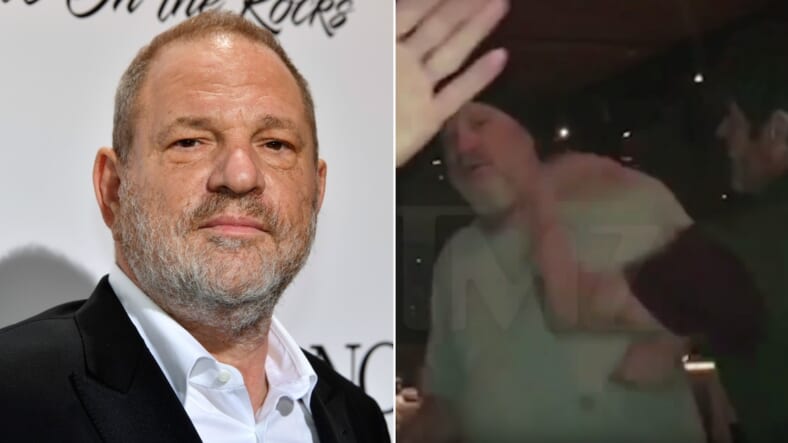 He’s persona non grata pretty much everywhere else, too. Case in point: some riled-up dudes at a restaurant in Scottsdale, Arizona noticed a down-low Weinstein eating with his sobriety coach, and it culminated in one of them, named Steve, backhand slapping him in the face (twice).

The video, recorded by the drunken patron’s friend and released by TMZ, shows Weinstein exiting the restaurant Tuesday night as “Steve” approaches him (if that’s even his real name).

“Don’t do that,” Weinstein tells him before the aforementioned smack-down. Weinstein’s dinner companion attempts to block the camera.

“You’re a piece of shit for fucking with those women,” Steve said, referencing his laundry list of sexual assault accusers, including Ashley Judd, Gwyneth Paltrow, Angelina Jolie, Asia Argento and Rose McGowan. “Get the fuck out of here! You’re a fucking piece of shit”

TMZ reports that the interaction between Weinstein and his “attacker” was not originally so heated. Steve initially approached Weinstein for a photograph and professed himself to be a fan of his movies, which Weinstein declined. The restaurant claims he did so politely.

But Steve got some liquid courage in him, and all bets were off. His friend told TMZ that Steve had “quite a bit to drink” and then asked his friend to record him approaching Weinstein. Weinstein reportedly declined to call police and then quickly left the restaurant.

Weinstein is reportedly camping out in Arizona, where is underground treatment for sex addiction. He is said to have checked in for some time at The Meadows, where actor Kevin Spacey also stayed after being accused of sexual harassment by a dozen men.

While he’s working out his demons, Weinstein might also want to work on his disguise.