Idiot EgyptAir Hijacker May Have Been Motivated By Love, Not Terrorism

This is NOT the way to win back your ex. 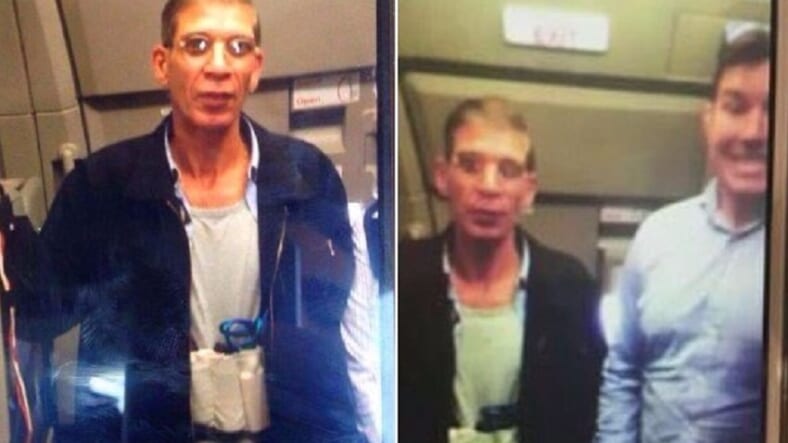 There is nothing funny about hijacking an airplane, but the diversion to Cyprus of an EgyptAir Airbus from its flight to Cairo on Tuesday was at least damned strange. Since 9/11 hijackings have been perceived as synonymous with acts of terrorism, but in this case, the middle-aged Egyptian man who commandeered the plane may have had an entirely different set of motivations, including old-fashioned lost love. As Reuters reported, authorities in Cyprus just weren’t sure:

Conflicting theories emerged about the hijacker’s motives, with Cypriot officials saying early on the incident did not appear related to terrorism but the Cypriot state broadcaster saying he had demanded the release of women prisoners in Egypt.

The hijacker, identified by Cyprus’s Foreign Ministry as Seif Eldin Mustafa, appeared to have an explosive belt strapped around his waist and was reportedly threatening to detonate it throughout the ordeal, even as he posed for photos with passengers.

The Guardian reported that Mustafa’s actions may well have been “connected to a woman, believed to be the hijacker’s estranged wife, who reportedly arrived at the airport.” Mustafa reportedly dropped a letter from the Airbus that he’d intended for her to see.

After the flight touched down at an airport in Larnaca, negotiators managed to talk Mustafa into freeing most of the 81 passengers and crew. He kept only seven behind, including four crewmembers—and footage showed one of the pilots climbing down from a cockpit window while negotiators continued talking with the hijacker.

Eventually Seif Eldin Mustafa surrendered. In addressing the situation, the Guardian reported that Cyprus’s leader, Nikos Anastasiades, seemed very clear as to the man’s motivations: “It’s all to do with a woman.” A Cypriot foreign ministry official quoted by Reuters was probably more on the mark when he said Mustafa seemed “unstable.”

The hijacker is currently in custody—and likely not any closer to reuniting with his ex.