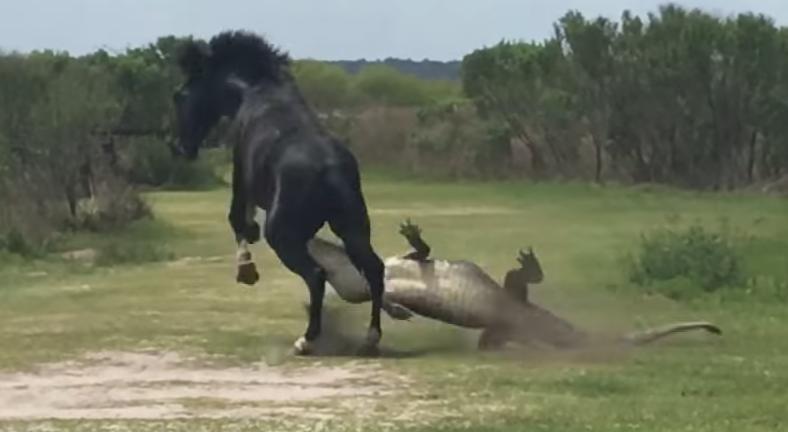 Visitors at a Florida state park captured the most unlikely animal beatdown you’ll ever see when they filmed a horse straight-up kicking an alligator’s ass.

In the wild AF video above, onlookers at the Paynes Prairie Preserve watched a Florida Cracker horse leave its grazing herd to confront the nearby reptile, who apparently was giving off some aggro vibes as the horses munched on some grass.

At first, both animals seemed to be minding their own business, but then the horse pulled a Mike Tyson and rushed over to deliver a painfully hard stomp to the gator’s torso.

Then the emboldened steed circles back and kicks the gator hard enough to send it flying belly-up through the air. The battered gator scurries off to presumably weep quietly in the grass and wonder how it tumbled off its rightful place in the animal food chain. Tough luck, humiliated gator.

As far as animal fights go, this one was ridiculously one-sided. But there are plenty of other bestial battles that occur between more evenly matched opponents.

There’s this crazy gorilla fight, for instance, filmed at the Omaha Zoo. Come at me, bro.

And then this leopard, who decided to fuck with a rock python, Africa’s largest snake species. Awww, shit.

And let’s not forget what happens when the face off is between giant snake and hapless human. Grab some popcorn and see how it all goes down here:

Damn, nature sure can be brutal sometimes.