The Images of the Destruction Wrought by Hurricane Irma Are Totally Devastating, As Florida Prepares to Face Its Wrath

The monster storm is the now the size of Texas. 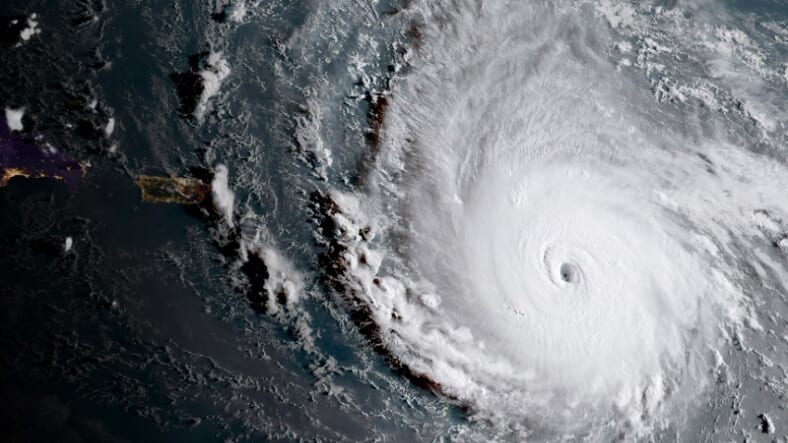 If you believe in a deity of any kind, you have to wonder why they’re so damn mad right now.

This week alone: three active hurricanes in the Atlantic—two of them have “major” storm status—a geomagnetic storm affecting power grids, and early Friday, Mexico experienced the country’s most massive earthquake in 100 years.

The star player in this disastrous line-up is Texas-sized Hurricane Irma, currently on track to make landfall in the U.S. directly over or near Miami.

Irma has blitzed across the Caribbean like a buzz saw, virtually destroying some formerly idyllic tourist destinations. The storm is so mighty it reportedly triggers earthquake monitors in its path.

Photos and videos of the astonishing destruction are equal parts sad and chilling.

Via Jonathan Falwell on St Martin: No power, no water, everything destroyed. Buildings gone. Please pray as this island is decimated. #Irma. pic.twitter.com/Gu5iwgUX4P

#CARIBBEAN: The French territories of St Martins and St Barts have suffered major damage and blackouts after being hit by Hurricane Irma. pic.twitter.com/YIjX5LKvRM

That Hurricane Irma will next plow into South Florida is a given. Forecasters still don’t exactly know where, reports the Washington Post:

The window to escape the path of Irma in Florida was rapidly closing. Forecasters said Irma will be near South Florida by Sunday morning and could potentially make landfall somewhere there, churning ashore in the wide band between the densely populated Atlantic coast and the 100-mile string of islands from Key Largo to Key West before veering to the north through the state and, potentially, on toward more population centers up the Eastern Seaboard.

Florida will likely get the worst of the storm, but FEMA administrator Brock Long said in a press conference that Irma was “a threat that is going to devastate the United States, either Florida or some of the southeastern states.”

Early Friday Irma was packing winds of 155 mph, dropping the storm to a still immensely deadly Category 4. Evacuations were taking place all across the tip of Florida, many of them mandatory.

Take a look at more photos and videos of Irma’s destruction below and if you’re anywhere close to South Florida, get the hell away.

Hurricane Irma kills 14 in Caribbean as it heads for Florida https://t.co/lFicDmrwK1 #HurricaneIrma pic.twitter.com/MNdcmeCvAt

RT BIUK: See the devastation caused by #HurricaneIrma in the British Virgin Islands as it makes its way towards #F… pic.twitter.com/89CVArDF3K

Irma has made her unceremonious arrival in the southern Bahamas. #HurricaneIrma #Bahamas pic.twitter.com/K49bfD93K3

#HurricaneIrma is now to affect the Dominican Republic and Haiti, before heading into Turks and Caicos. #Irma #IRMA pic.twitter.com/CZXFUA3aiF