The Big Game wouldn’t be complete without at least one controversial ad. 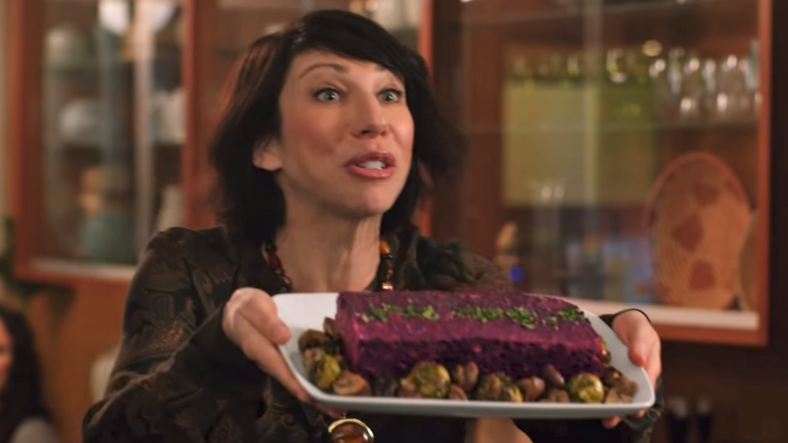 Sandwiched between plays of the lowest-scoring Super Bowl ever and an admittedly lackluster halftime performance by Maroon 5, there were the customary multimillion dollar commercials.

Nearly everyone agrees that brands played it safe with this year’s Big Game spots. Well, everyone except PETA. It seems People for the Ethical Treatment of Animals took issue with Hyundai implying that eating vegan “Beetloaf” sucks more than than getting a root canal, showing up for jury duty, or taking the middle seat on an airplane. Watch it above.

Actor Jason Bateman plays a bellhop on an elevator that travels down, visiting floors filled with universally disliked experiences along the way. At the very bottom is “Car Shopping” which is where the South Korean automaker plugs their “Hyundai Shopper Assurance” service.

PETA’s problem was with the “Vegan Dinner Party” floor. The organization voiced its displeasure on Twitter and suggested that viewers by a Mercedes-Benz Smart car instead of a Hyundai.

ICYMI: The trend of 2019 is taking the elevator UP to vegan dinner parties (and an Earth, heart, & animal-friendly lifestyle). Instead of buying a car from people with outdated ideas, we suggest a vegan Smartcar by Mercedes. Great mileage & acceleration, turns on a dime.

“The trend of 2019 is taking the elevator UP to vegan dinner parties (and an Earth, heart, & animal-friendly lifestyle),” read the organization’s tweet, “Instead of buying a car from people with outdated ideas, we suggest a vegan Smartcar by Mercedes. Great mileage & acceleration, turns on a dime.”

Responses to PETA’s tweet poured in, with many users claiming that animal rights group has no sense of humor.

Instead of a SmartCar, May we recommend obtaining a sense of humor?

Funny how I don't see any proctologist, dentists, airline workers, etc. crying about being teased. I respect my vegan friends, enjoy vegan dishes they make (a lot!) and thankfully the majority of them found the ad to funny as well. #GetOverYourselves #AllInFun

I used to support you, but you guys have become so insane lately.

Others appeared to agree with PETA’s point of view.

.@Hyundai Vegan dinner parties are not only delicious, but they'll also keep football fans in the game! Parties with chicken wings and cheesy pizza cause average fans' triglycerides to increase by 60% by halftime. https://t.co/5ivPA8JFzy pic.twitter.com/cGiOc5trpn

How stupid is @Hyundai for alienating #vegans who will live longer, to buy more cars? One of the fastest growing populations of people, seeking health & peace. Crossed you off our list. #Superbowl

Vegan dinner party is hell? Come on Hyundai. Mocking people who care about animals is not cool. Way to alienate your demographic. Want hell? Try visiting a slaughterhouse.

Someone at Hyundai USA went into damage control mode and posted a recipe for the “Beetloaf” seen in the ad with the words, “We actually love vegan food and are glad it’s going more mainstream.”

For what it’s worth, PETA recommends seven different Hyundai models with leather-free interiors on its website.

Maybe a bite of “Beetloaf” will help those angry vegans get the bad taste out of their mouth.