Meet the Man Who Sees Networked Brains, Virtual Immortality, and Endless Orgasms in Our Future

We caught up with the world’s most unusual engineer to gain insight into the gadgets of the future. 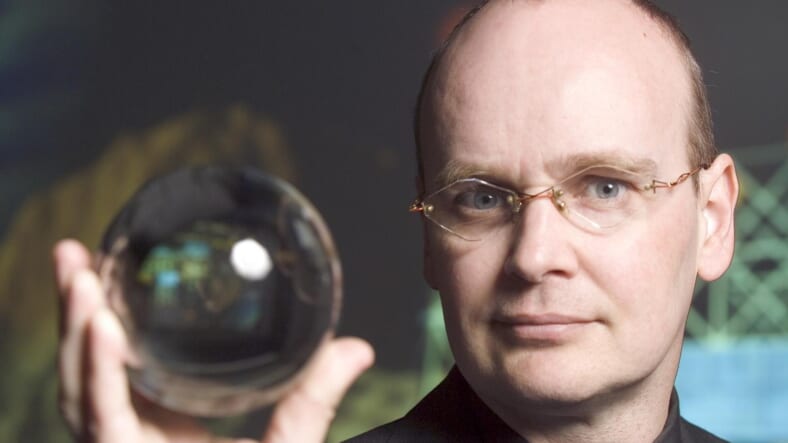 Dr. Ian Pearson calls himself an engineer, but he’s really something of a fortune teller.Pearson, a distinguished futurist with degrees in applied mathematics and theoretical physics, has spent the last 25 years conceptualizing pieces of future technology. But a couple things set him apart from that creepy fortune teller with the crystal ball. He has a vast knowledge of how physics and engineering apply to the development of new technologies, and he claims to have a track record of predicting the emergence of futuristic new disciplines.There’s some evidence to back this claim up. Back in 1991, before the general public had ever heard of email, Pearson predicted the rise of text messaging. And that nifty contact lens Google has been working on for for the past couple of years? Pearson foresaw what he called an active contact lens over 20 years ago.

Pearson’s success as a futurist has landed him speaking engagements at various conferences, and as part of the lead up this year’s Big Bang Fair, a convention for technology and science in the U.K. where Pearson will speak March, he mentioned some predictions regarding human mortality featured in  Daily Mail. We caught up with him to learn a little bit more about what the future holds.

This is exactly what it sounds like. According to Pearson, we’re nearing a point where people will have the ability to communicate telepathically from any where on earth through a sort of global server that interfaces with the brain. That means that instead of using Google or Siri to find answers to life’s trivial questions, you’ll just have to think about it, and the answer will be made available over a network. And the best part is that all of this will be done without any invasive surgery or dramatic changes to the brain.

“It definitely will not be opening up your head and sticking a chip in it,” said Pearson.  “With just an injection… tiny little nanotechnology-based particles will float through your bloodstream across the blood-brain barrier and connect to the neurons themselves. They will be able to pick up electrical signals directly from those neurons and feed them outside into the IT, and your brain basically becomes part of the IT system.”

We’re talking about capabilities less like Garfield and more like Stephen Hawking, but it follows that if you can inject a person with nanotechnology-based particles to create the brain linkages mentioned above, you can do the same with your dog, too.

“(You could) enhance your pet’s IQ by giving it some extra intelligence and allow it to understand what you’re saying by putting your words into ‘dog language,’ then pick up its emotions and what it’s trying to say, and translate that into words with a voice synthesizer,” said Pearson.

The key word here, obviously, is virtual. We may never be able to stop the gradual degeneration of the human body (though it doesn’t stop us from trying), but we will be able to upload our minds on to a server and continue existence in another form, such as a robotic android. While it could certainly be technologically possible in the near future, some serious concerns regarding overpopulation will need to be addressed. “You (might) have to timeshare (an android) with somebody else who wants to carry on existing in the physical world, otherwise you’re basically a brain in a jar in a big call center,” said Pearson.

Have you ever wished you could go back in time and relive that crazy sexcapade of a night all over again? Well get ready, because “active skin,” as Pearson calls it, is coming in the next decade. “If you can get nanotechnology downsized to the point where you can make electronic capsules about the same size as skin cells, you can plant them in the skin, that will allow you to connect to nerves,” said Pearson. “Then you can connect your peripheral nervous system to the IT, so you can record and replay sensations. And this is more 2020 technology than 2050 technology.”

Replaying sensations? We hear a playlist of orgasms set to repeat.

You read that right. Tiny little “astronaut fairies,” as Pearson calls them, will be made available for space exploration, because downsized people means downsized spacecraft and lower costs.“You could re-engineer the brain into an IT replica of the brain, but use nano technology circuitry instead the large scale organic stuff, so you could put your brain on the size of a pinhead, and it would still run far faster, be far smarter and have far more memory than the human brain,” said Pearson. “If all you have to do is make a little spaceship with little people who have the same intelligence or superhuman intelligence and they can make a fly around the cabin using their little wings, apart from looking cute, that actually makes quite a lot of sense from an engineering standpoint.”

Of course, the future isn’t all orgasms and cute little fairies. As technology advances, there’s plenty to fear too, from the threat of killer robots to a nasty new generation of genetically engineered biological weapons. But we can at least be certain about one thing: If any of Pearson’s inventions come to fruition, life will be pretty fucking awesome.