Can you do it? 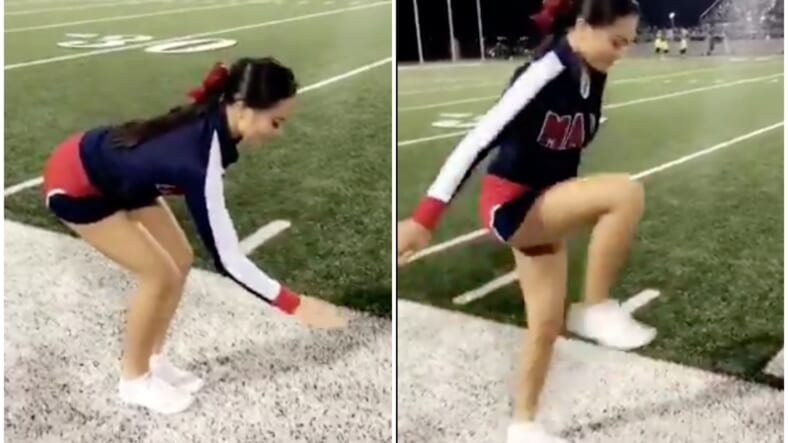 The internet is a breeding ground for weird and unnecessary physical challenges, like sucking a condom through your nose, the highly unsanitary #portapotty challenge, and trying to eat an entire spoonful of dry cinnamon without dying.

The most recent of these internet challenges is stepping over an invisible box, which isn’t as absurd as past challenges, but it still has the internet going absolutely nuts for some reason.

The fad started back in August, when Anderson University football player Dontez Hines uploaded a video to Twitter where he pats an invisible box, steps on it with one foot, then hops over it with the other.

Obviously, people lost their shit when they saw this mind-blowing illusory party trick, and they had to try it for themselves.

A cheerleader at Manvel High School named Ariel Olivar totally defied gravity and nailed the move, and her video got retweeted over 100 thousand times.

Others, however, failed miserably and ate shit when they attempted to step over the invisible box. Here’s a fun compilation of some people succeeding and others failing really hard:

So, what was the inspiration behind the move? “It is really nothing special,” Hines told Men’s Health. “I just imagined that there was a box and stepped on it.” Wow, inspiring.

Tempted to try the invisible box trick yourself? No problem. All you need to do is imagine the box, and then step on it…but the fitness editor at Men’s Health, Ebenezer Samuels, says the move requires an insane amount of strength and stability, meaning that not everyone can execute the move as flawlessly as others.

“All his hip stabilizers on the right side are firing on overtime to hold that hip in position,” Samuels says of Hines. “You’ll notice his body rotates toward the leg on the step as well; there’s a ton of oblique and ab stability maintaining that position. Very explosive hip flexor, abdominal and glute strength is what is driving the leg up and over the box.”

Hear that? All you need is a little bit of imagination, an invisible box, and explosive hip flexors, abs, and butt muscles. Simple!