They may not be over yet. 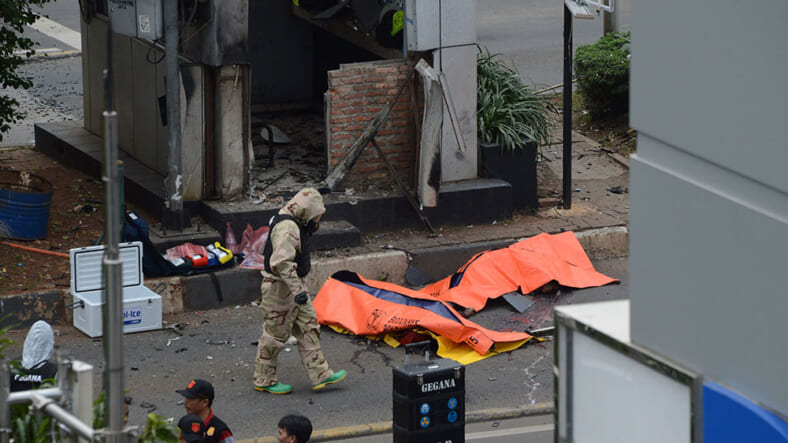 ISIS has taken credit for a Paris-like series of bombings and armed attacks in a shopping district in downtown Jakarta, Indonesia early Thursday morning.

Seven bombs detonated and gunfights raged in the area Thursday, killing seven. The Guardian reports that an ISIS-linked news agency used the terrorist group’s Telegram communication system to state the attacks were against “foreigners and the security forces tasked with protecting them in the Indonesian capital.”

The Guardian cited Jakarta’s Metro TV in reporting there were as many as 14 gunmen taking part in the attacks, which began in the middle of the morning and carried on till 3 p.m. local time.

Risky Julianti, 25, a sales promoter at the Sarinah Mall, had just arrived at work and was changing into her uniform when the first explosion went off. She said she heard at least five more blasts and saw three people dead. “The building was shaking heavily when the blast happened. An office boy shouted ‘bomb, bomb’ and we quickly ran out to a church nearby,” she told the Guardian. “I was very panicked and I was crying. We heard the blasts as we were running to the church.”

In a liveblog tracking developments, RT reported Thursday that there were new explosions in Jakarta not far from where the earlier rampage occurred, but a later report live on CNN said this was a false alarm.

U.S. Secretary of State John Kerry said on Thursday that this new wave of attacks would not “intimidate nation-states from protecting their citizens and continuing to provide real opportunity, education, jobs, possibilities of a future.”

The United States embassy in Jakarta was closed, and in a statement said “we stand together, all of us, united in our efforts to eliminate those who choose terror.”

One of the bombings was captured on video and posted on social media:

Starbucks, Sarinah mall in #Jakarta pic.twitter.com/51mYDdLnGR So ISIS planting roots there too?

We will update this post with new details as they become available.