It Absolutely Sucks to Be an ISIS Fighter Right Now

Life fighting for the Islamic State: Low pay and the ‘sisters’ diss you on social media. 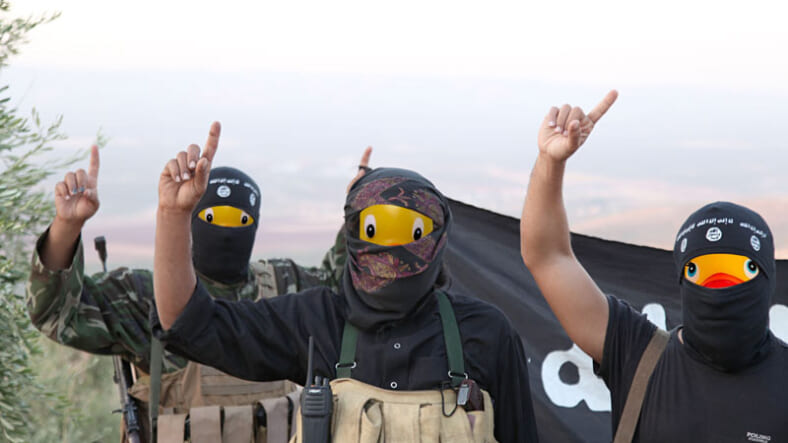 If you’re a jihadist fighting for the Islamic State, life pretty much sucks right now. Sure, it was already kind of bad; snipers are owning your suicide bombers left and right, and the internet pranksters 4Chan started photoshopping you and your bros as a bunch of ducks. Now it’s getting worse.A new document reveals that ISIS fighters recently had their pay slashed by decree of the caliphate’s Treasury Ministry. The bureaucrat who announced the decision attributed it to “the exceptional circumstances the Islamic State is facing,” by which he might mean the series of allied airstrikes targeting ISIS banks, the group’s ouster from its stronghold in Ramadi and other areas, Russian airstrikes on Raqqa, and so on.

Naturally, the across-the-board pay cut was also spun in religious terms, wrapped in a lecture about how the worship of Allah and the Prophet Muhammed are actually the only wealth anyone truly needs, when you come right down to it. Nice try. Bottom line, fellas: you’re screwed. Here’s the upshot, as translated by Aymen Jawad al-Tamimi, a research fellow at the Middle East Forum.

So on account of the exceptional circumstances the Islamic State is facing, it has been decided to reduce the salaries that are paid to all mujahideen by half, and it is not allowed for anyone to be exempted from this decision, whatever his position. Let it be known that work will continue to distribute provisions twice every month as usual.

The memo seems legit, says Amarnath Amarasingham, a fellow at the George Washington University Program on Extremism. “It was shared by the Aleppo News Service, and I asked a few fighters and supporters about it, and they’re basically saying it’s because of the airstrikes of some of the revenue-producing sites and the banks that were targeted,” he says.

Meanwhile, that favorite jihadi pastime of aggressively messaging random women online — a hobby favored by dweebs of all political stripes — just earned some thirsty-ass scrubs a major social media smackdown from one of their own. Writing on Telegram, a poster going by the name Umm Isa al Amriki just totally read her “brothers” the riot for sliding into her messages like

“Can you not read a simple message?” the woman, whose name and use of English suggests she is American, wrote in a blistering 500-word screed. “Can you not see that I do not wish to speak to you? Can you not listen when you are told not to message me?”

Calling them “pitiful,” she then totally goes off. This girl has had it.

“Even a dog can be taught basic commands like sit, walk, bark, and be quiet,” she writes, putting the jihadi fuccbois on blast. “Yet sad it is that some men cannot even learn simple rules like ‘go away.’ Do you need a doggy treat every time you learn to obey commands?”

The woman, whose “about me” post declares her condemnation of “all acts of peaceful coexistence between Muslims and non-Muslims,” continues in a tone of fierce indignation, “We are your sisters in Islam NOT your [relatives], so back off. I don’t know you, nor do I wish to know you…. My account is for sisters only, so unless you menstruate do not message me.”

Amarasingham notes that the woman’s account is typically full of Islamic quotations and images of daily life in Syria, where she purportedly lives with her husband.

One wonders if she’ll remain this loyal to him when she gets a look at his next paycheck.