What It’s Like Living as a Prisoner of ISIS

“Every day they woke me up, and I thought maybe it would be my last.” 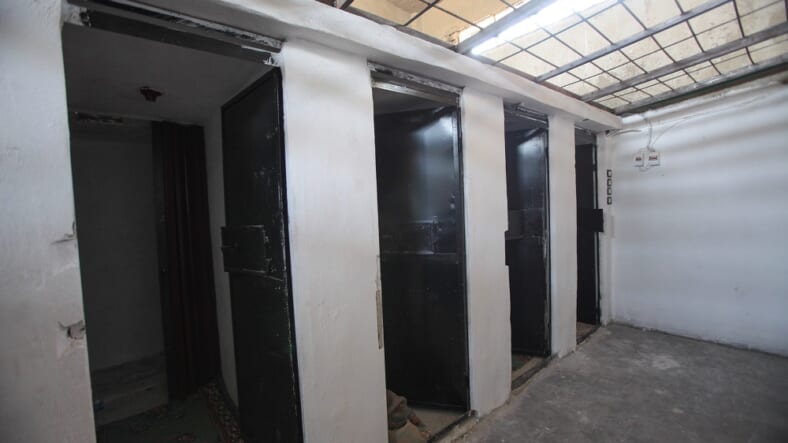 Some have made it out of ISIS-controlled prisons alive and the stories they have to tell are as dark as you might expect. Speaking to BuzzFeed, unnamed men taken prisoner after the Islamic State took control of the town Tel Abyad, Syria, revealed what it was like to live under the Islamic State’s iron hand.

BuzzFeed reporters Mike Giglio and Munzer al-Awad toured the facility after the jihadis were driven out of the city and found that men had scrawled their phone numbers (as well as quotes from the Qur’an) on the walls. The journalists were eventually able to reach a handful of former prisoners and get their stories of fear and degradation.

On torture: The prisoners were beaten on a regular basis, but the greatest torture the men endured was psychological. The prisoners learned to fear a large basement room containing stacks of Qur’ans. They knew that was where their captors performed executions. “Every day they woke me up, and I thought maybe it would be my last,” one man told BuzzFeed. The prisoners could hear others being beaten as well. Men freed from other ISIS prisons have told horrific stories of torture involving suffocation and electric shock as well.

On daily life: The jihadis fed prisoners one meal a day, but they force-fed captives lessons in the caliphate’s oppressive form of Islam. One man imprisoned with his father was told in detail about his father’s death. He was so cowed from fear he pledged allegiance to ISIS and was eventually released, reported BuzzFeed.

On the promise of freedom: In the BuzzFeed story one of the most poignant details was the prisoners’ awareness that they were almost a stone’s throw from the Turkish border and freedom. “Freedom was so close to us,” said one former captive.

On meeting the face of evil: Most of the men who spoke with BuzzFeed’s reporters had no love of ISIS. Even a man who’d been beaten by Kurdish fighters after they took over the facility felt they were the lesser of two evils. “I was praying every day that ISIS wouldn’t take back the prison before I left,” he told BuzzFeed. Another ex-prisoner, however, remained loyal to the caliphate. He indicated he’d been jailed because he “was a bad person,” but he was “waiting for a chance to join” ISIS again if he could get back into Syria.

ISIS-sanctioned torture seems almost predictable, but the Islamic State has also made it clear in seized documents that sexual assault and organ harvesting from living prisoners are considered acceptable.

ISIS remains a threat to the Middle East and the world, but after learning more of the horrors visited on their prisoners, it’s a small relief to learn that fighting for the caliphate is is getting tougher and much less rewarding.