This isn’t the counterterrorism robot we imagined. 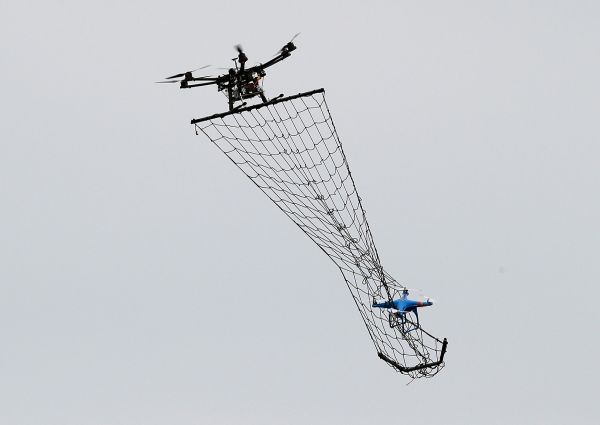 Japan has always been known for its odd inventions, ranging from the utterly bizarre to the surprisingly convenient, but Japanese police just unveiled an unusual new innovation that could actually be crucial to the country’s counterterrorism efforts: Drones outfitted with flying nets.

Here’s the story: Back in April, Tokyo suffered a security scare when radioactive sand was intentionally dropped by drone onto the roof of the Prime Minister Shinzo Abe’s office, the BBC reports. In response to this new threat from above, Japanese officials have developed its own innovative drone interceptor system to defend against dangerous attacks from the sky. It really is as simple as it sounds. Take a look:

Starting in February of next year, important buildings in Tokyo including the Imperial Palace and the prime minister’s office, will be guarded from the sky by drone squads ready to chase down and capture unwanted flying objects. Japanese authorities claim that the simplistic drones-with-nets approach are a safer than the standard method of shooting down any illegal flying devices, as the nets can safely lower threatening drones to the ground without the risk of debris landing on pedestrians.

Although the image of nets chasing after flying objects in midair may be reminiscent of SpongeBob SquarePants whimsically “jellyfishing” in Bikini Bottom, Japanese police are actually quite serious about the nets’ lifesaving potential.

“Terrorist attacks using drones carrying explosives are a possibility,” a member of Tokyo’s Metropolitan Police Department told The Asahi Shimbun in Japan. “We hope to defend the nation’s functions with the worst-case scenario in mind.”

Several other drone defense technologies do exist, such as geofencing, which digitally prevents drones from flying into restricted airspace, or radar signal jamming, which is banned in the U.S. by the Federal Aviation Administration, but chasing drones around with flying nets seems like the most enjoyable way to ward off airborne terror yet.