No one ever hijacked a plane with cake. 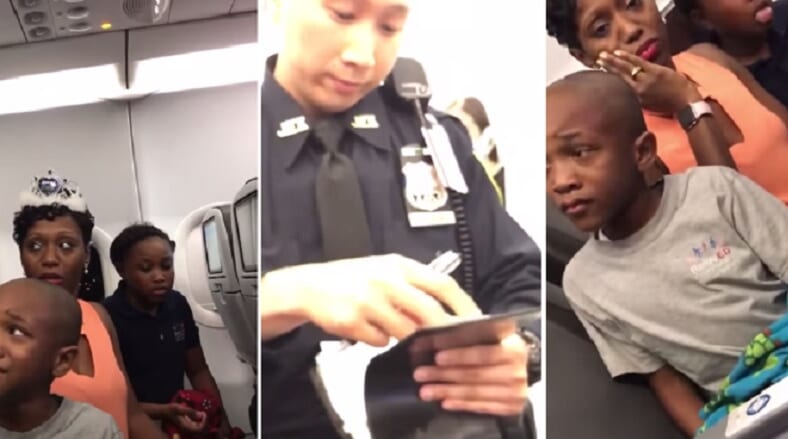 Minta Burke boarded a flight with her husband Cameron and kids on May 3 to fly from New Jersey to Las Vegas to celebrate her 40th birthday. She wore a crown and the family also brought her buttercream cake on board. Turns out that was a bad idea, according to JetBlue. As the video above shows, the police became involved and the Burkes were kicked off the flight.

Initially a flight attendant asked the family to place their cake in one of the overhead bins. Speaking to the New York Daily News, Cameron Burke said the first attendant asked “nicely,” but the cake’s storage still wasn’t satisfactory, so Burke was asked to move it two more times.

Another flight attendant got involved then, and suddenly things were much more serious. “She said I was being non-compliant,” Burke told the News. He reportedly said he then confronted the second attendant and said, “‘Miss, have you been drinking?’”

Burke explained that he’d asked what would normally be a rude question “Because her behavior was irrational.”  But that was when the attendant “stormed off,” he said.

According to the Daily News, a third member of the flight crew asked the family to leave the flight, and eventually the police were summoned.

Port Authority police had boarded to see what the problem was. According to the responding officers, the Burkes did nothing wrong.

The captain ordered the family off the plane anyway, with a pair of crying and frightened kids in tow.

For their part, the airline isn’t backing down. JetBlue rep Doug McGraw told the News that the Burkes “became agitated, cursed and yelled at the crew, and made false accusations about a crewmember’s fitness to fly.”

Burke was able to book a flight the next day on United, but has said he definitely intends to file a lawsuit.

Reaction on social media has been pretty one-sided.

These airlines really take the cake! #JetBlue doesn't want to be left out of the lousy airline party! https://t.co/Yu4KjyDLYi

This is just the latest in a series of recent actions by various airlines that outwardly appear to be less about safety and more about the attitudes of crew members on a particular plane—there was the Kentucky doctor dragged from a United flight, a family kicked off a Delta plane for not giving up their toddler’s seat, and a young woman booted from a Spirit flight for having too much cleavage.

Sometimes it feels like it’s just a good idea to stay home and not bother.