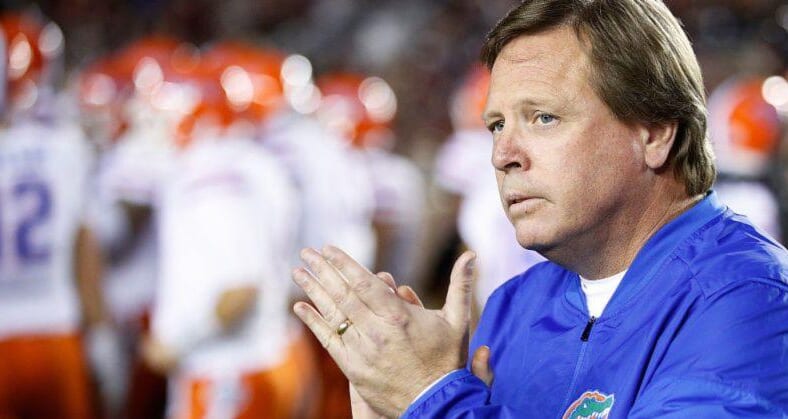 A photo showing a completely naked man with his legs wrapped around the torso of a dead shark went viral after people began claiming that it was University of Florida head football coach Jim McElwain.

UK-based television presenter and animal activist Anneka Svenska tweeted the photo. Shortly after, allegations that it was the Gators coach started rolling in.

that is the head football coach of the Florida Gators Jim Mcelwain. pic.twitter.com/wqlDcomnxX

That is @CoachMcElwain and he got a BIG recruit! 🤣😂🤣😂

Deadspin reached out to the University of Florida for comment. “He’s told us it’s not him,” a spokesperson for the university’s athletic department said.

We want to believe that, but the resemblance is incredibly striking. Here’s a photo of McElwain at a 2014 press conference:

…and here’s the unidentified fish freak in the photo:

That toothy grin certainly  does make McElwain look like culprit. But it’s also been proposed that the nude shark-humper is John Liautaud, founder of the Jimmy Johns sandwich shop chain.

He seems to have both the smile and hair of the weirdo in question. What’s more, another Twitter user pointed out that Liautaud is an exotic animal hunter, making it totally conceivable that he would kill a shark.

Animal serial killer Jimmy John Liautaud smiling/posing next to some of his victims>🐘🦏🐆🐑🐻(laying naked on a dead shark wouldn't surprise me) pic.twitter.com/GXBwsTqOjl

But everyone’s core reaction was that of total bewilderment and disgust.

That is nasty & he is supposed to be the "higher evolved, civilized" of those two? I beg to differ. 🙊

We may never discover the man’s true identity, especially since no sane person would want to take credit for such an embarrassing act.

What we can all agree is this: the type of dude that wants to press his bare package up against a dead sea creature is a special kind of freak.