Can you smell what Biden is cooking? 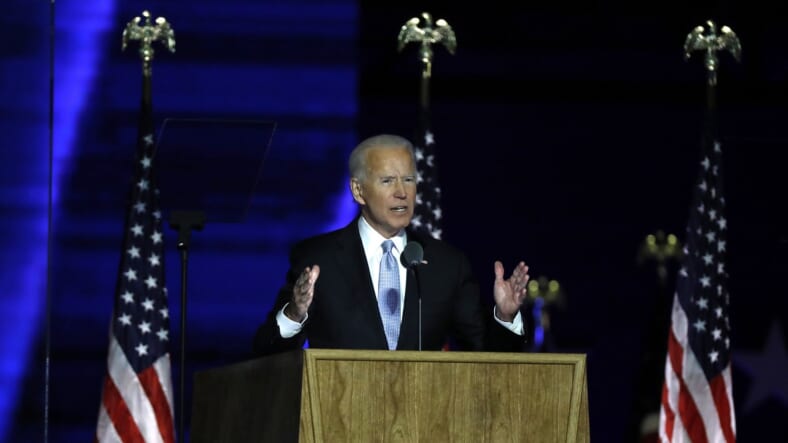 A point of contention for his opponents and pundits regarding former vice president Joe Biden‘s run for president was always his age — Biden turns 78 on November 20.

As he came out the night of Saturday, November 7th to give his victory speech as president-elect, Biden seemed bent on making sure his audience knew that almost-78 is just old, not dead. The newly-elected Democrat hit the runway up to the podium at a jog and reached the mics with breath to spare. It was immediately meme-worthy, so naturally, it became one.

Twitter took up the burden of ensuring the meme had a load of variations, but the underlying joke was the same: It was an entrance worthy of the WWE.

President Joe Biden running to the stage to The Rock’s WWE anthem 😭😭 pic.twitter.com/pwRytprRb4

After seeing a few earlier, I may or may not have been flipping through WWE Entrance songs the last hour or so & playing them to the Biden run in…😂 Made this one inspired by New Age Outlaws theme song pic.twitter.com/NmTsRJHA4v

President Donald Trump has yet to concede the election and is not legally required to announce it if he does, but Biden’s and veep-elect Kamala Harris’s reps have already made it clear that their teams are hitting the ground running in preparation for the transition of power.

Even if Biden wasn’t your candidate — and over 70 million people voted for his opponent — it was a pretty impressive way for a man nearing 80 to let people know that his health, which President Trump turned into an issue on the campaign trail, is probably fine.