The Man in Black would NOT approve. 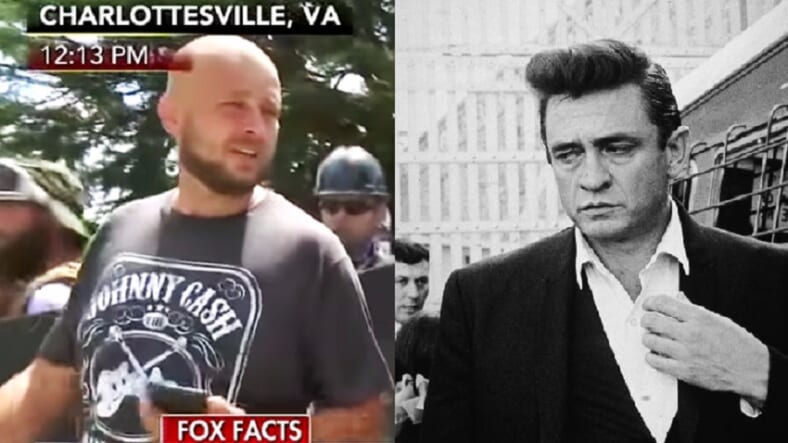 Many think they have a good idea of who Johnny Cash was—a general purpose badass country and rock and roll legend. That’s the barest surface understanding of the man. He was also, as his own family just made crystal clear, “a man whose heart beat with the rhythm of love and social justice.”

The Cash family learned that some white supremacists and neo-nazis marching in Charlottesville, Virginia over the weekend were sporting Johnny Cash tee-shirts.

With daughter Rosanne Cash in the lead, they were quick to shut down the idea that the Man in Black would ever find common cause with overt racists.

In no uncertain terms they stated that Cash “championed the rights of Native Americans, protested the war in Vietnam, was a voice for the poor, the struggling and the disenfranchised, and an advocate for the rights of prisoners.”

The Cashes were adamant about how they felt about the Virginia protests, stating that the “white supremacists and neo-Nazis who marched in Charlottesville are poison in our society, and an insult to every American hero who wore a uniform to fight the Nazis in WWII.”

Johnny Cash was a rebel, but he’d clearly be appalled at how his rebel spirit could be so misunderstood that violent racists might proudly wear clothing bearing his name or image.

His family makes it plain that he’d be much more likely to sing along with those who staged a candlelight gathering at UVA on Wednesday night, singing “Lean on Me.”

As the Cashes said in their statement: “Our dad told each of us, over and over throughout our lives, ‘Children, you can choose love or hate. I choose love.’”

Seems like living your life in tune with Johnny Cash’s principles took a lot more strength than any loser marching with a Tiki Torch and giving a Hitler salute could possibly imagine.