Jon Stewart Just Saved a Runaway Bull From the Slaughterhouse 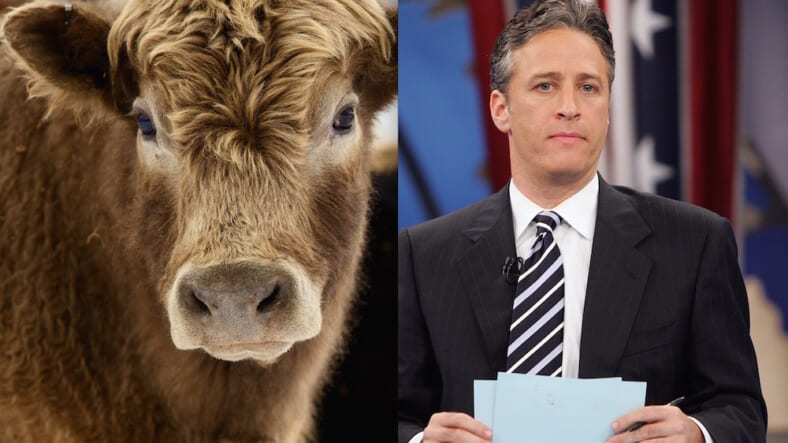 Comedian Jon Stewart, of all people, just came to the rescue of a runaway bull that made waves on social media Friday.

On Friday, an Angus bull made a getaway from a cattle train en route to a slaughterhouse in Jamaica, N.Y. After photos and videos surfaced of the escaped bovine basking in his newfound freedom on the grass lawns of York College, he was celebrated as the big bull who could. Many dubbed him “Frank Lee” after the infamous Alcatraz escapee.

Cows running around at york college

Eventually, Frank was subdued by NYPD and brought to the Animal Care Center in Brooklyn, where his fate was touch-and-go for a bit. Lovers of viral animal escape stories everywhere held their breaths.

Clearly moved by the outpouring, the former Daily Show host and his wife Tracey McShane, a noted animal lover, drove from their farm in New Jersey to Brooklyn. There, they invited Frank to spend a weekend on their family farm before being sent to Cornell University Hospital for Animals.

Breaking News: We are happy to report that the bull who was on the run earlier today in Queens is safe and on his way to…

In other words, his dash for freedom was a success. At the Watkins Glen facility, Frank can graze the 175 acres of land alongside other worry-free cattle.

We hope they aren’t too jealous of their new roommate’s celebrity pals.