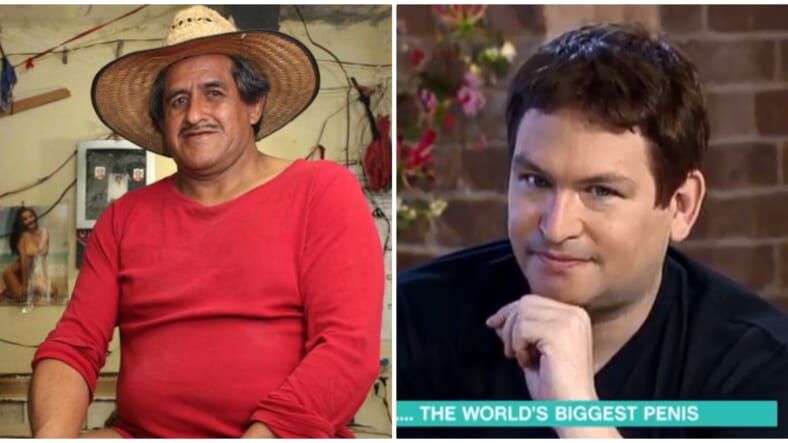 Remember the man with the biggest penis in the world, Roberto Esquivel Cabrera? You know, the dude who has a dick so fucking big that he had to register as disabled because he can’t even work because of his monster penis?

Well, it looks like Cabrera and his mammoth 18.9 inch dong have a rival: the awesomely-named Jonah Falcon.

While Falcon technically has the world’s second biggest penis, measuring a whopping 13.5 inches, he’s claiming that Cabrera is a total cheater and that his manhood is not natural, but rather the result of “stretching.”

“His penis isn’t 19 inches,” Falcon told The Sun. “Doctors have acknowledged this and said he could have a normal sex life if he is essentially circumcised. [Roberto’s story] has been going around for the past two-and-a-half years. The man stretched his foreskin constantly, from what I understand, but it’s normal underneath.

“I think it’s ridiculous and he seems kind of desperate. No matter how big he is, it’s not going to change the fact that I’m 13.5 inches.”

Damn, the title for the world’s biggest dick has now turned into a actual pissing contest. But Falcon begs to differ, saying there is no competition.

“I’m not competing with anybody, at least not directly. It’s not going to change who I am and what I have and in my eyes, it’s kind of pathetic. If you can’t use it, what good is it for?”

But here’s the thing – Falcon isn’t wrong about Cabrera. According to a CT scan, most of Cabrera’s penis is foreskin, meaning Falcon might have the actual biggest dong in the world.

“Our findings on the CT scan were that he has a very large foreskin, it goes almost to the knee,” says radiologist Jesus Pablo Gilmore.”The glands themselves are only six to seven inches from the pubic. It doesn’t go all the way through the foreskin.”

Interesting. But no matter who actually has the bigger penis is, one thing is for certain: They’re both ungodly huge. God bless.