The far-out mission seeks to learn about the origins of our solar system. 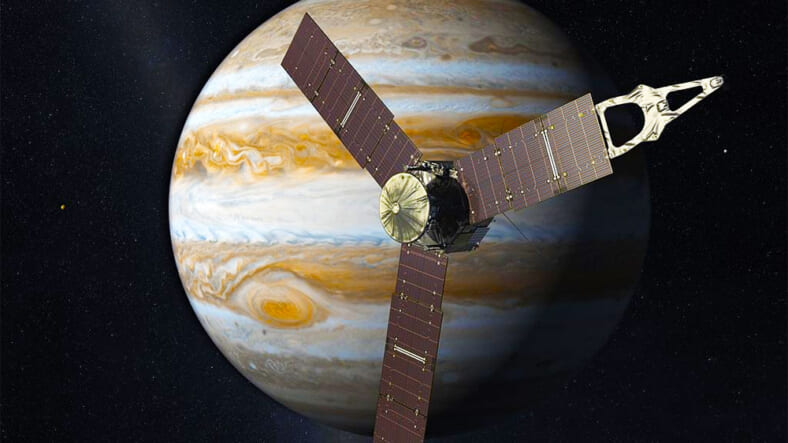 It looks like a giant flying fan and it’s the most popular spacecraft on Earth today, though it is 540 million miles away and orbiting Jupiter.

We’re talking about Juno, an unmanned ship launched as part of NASA’s New Frontiers mission back in August, 2011. On Monday Juno finally arrived at the largest planet in the solar system and went into orbit.

You can watch the jubilant reaction at mission control to Juno’s successful arrival here:

Juno’s mission is to study what’s going on beneath those orange and white clouds swirling around the gas giant, which could lead to answers about the evolution of our solar system. Tech Insider tells more about the questions Jupiter’s newest manmade satellite seeks to answer:

Could our solar system’s largest planet be hiding a solid metal core? Significant amounts of water? The keys to understanding the origins of our solar system, Earth, and the ingredients needed for life itself? Scientists think these are all serious possibilities.

Juno is perhaps the size of a small plane, but it was still the little space ship that could. As National Geographic reported, Juno faced “belts of radiation unlike anything any spacecraft has ever encountered” and Jupiter’s mighty magnetic field, which includes a “deadly hailstorm of charged particles more than capable of annihilating sensitive electronics.”

Had Juno’s final burn to slip into its programmed orbit not gone perfectly, it could have easily blown right past Jupiter and rendered the whole five-year mission pointless.

As plucky as Juno has been, National Geographic reported the craft’s mission will end in just under two years with a kamikaze plunge into the Jovian atmosphere.

Hopefully by then scientists will have a much more thorough knowledge of what’s really going on inside Jupiter’s clouds, and some incredibly new imagery from Juno’s cameras to inspire future missions.