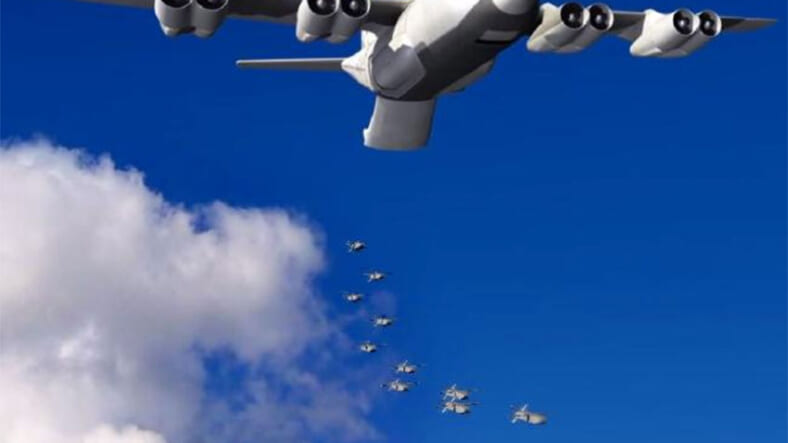 DARPA first published a release about its concept for “friendly” Gremlin drones — cheap, small, drones that could assist air ops — in 2015. Speaking to Flightglobal at the AUVSI Xponential conference in early May, Pentagon-based Air Force chief of remotely piloted aircraft operations Colonel Travis Burdine discussed possible future uses for the same concept that may be necessary, but not “friendly” at all.

Col. Burdine spoke of swarms of small Unmanned Aerial Vehicles (UAVs) that would launch from bombers. In a fight against an enemy with considerable capability — North Korea, China, Russia — they would assume multiple roles depending on need. Some might deploy frequency-jamming signals to disrupt communications between enemy aircraft, others might record the action, still others might act as kamikaze units, overwhelming enemy rockets.

He continued, explaining how those kamikaze drone units might function:

“I need a stealth bomber that’s going to get close, and then it’s going to drop a whole bunch of smalls – some are decoys, some are jammers, some are [intelligence, surveillance, and reconnaissance] looking for where the SAMs are. Some of them are kamikaze airplanes that are going to kamikaze into those SAMs, and they’re cheap. You have maybe 100 or 1,000 surface-to-air missiles, but we’re going to hit you with 10,000 smalls, not 10,000 MQ-9s. That’s why we want smalls.”

Burdine’s comments seem to indicate that the Air Force, while having perhaps dragged their feet a little on pulling the trigger on diving into creative drone use, is getting off the stick.

The concept isn’t that futuristic, anymore. As Popular Science noted, Israel has kamikaze drones and they’re already in action — the Washington Post reported on a sighting of one in April, 2016.

Drone swarms mark a fascinating step forward in warfare tech, perhaps one of the most pronounced moves away from World War II-style reconnaissance and bombing runs seen so far this century.

As long as no one sneaks any artificial intelligence into the mix to let the kamikaze drones know what they’re up to, this seems like a vital defense development to help keep the U.S. the number one military power in the world.